Photo Festival #LaGacilly in Baden near Vienna: “Viva Latina!” in 2021.

Colourful. Deliberately provocative. Explosive, even, from a geo-politicial point of view. That’s how I would describe this year’s “Festival La Gacilly-Baden Photo” in just a few words. In 2021, the main title of Baden’s annual photo exhibition is “Viva Latina!”. And with it the promise to take us into the colourful world of South and Central America. However, this world is not only colourful. Take the pictures of the journey of the monarch butterflies in Mexico, for instance. Although they promise dazzling impressions of a different – intact? – world, the photographs convey other, more burning questions, too: How much longer? (How) Do we “manage it all”? How can we all live together in the midst of geopolitical tensions? What can we learn from the world-class photographs shown here, taken mostly by Latin American photographers? 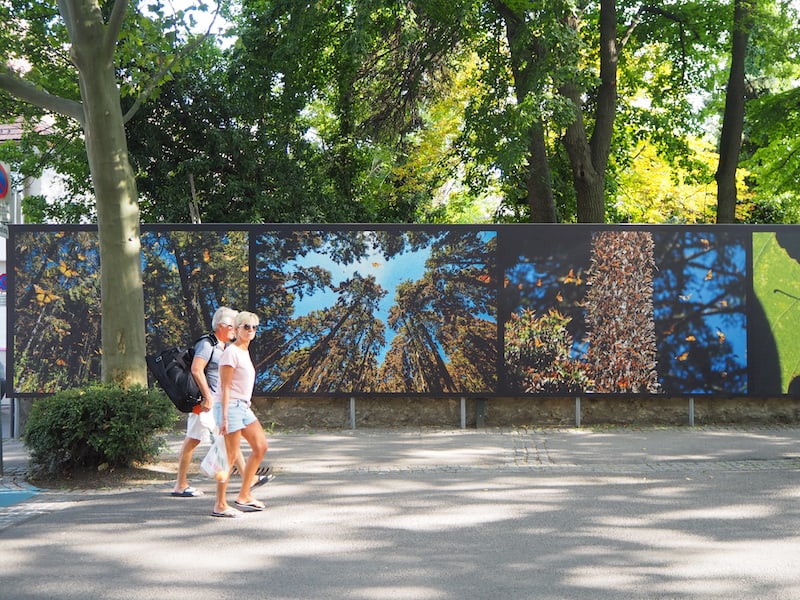 Visitors at the Brusattiplatz main square in Baden near Vienna, strolling through the photo exhibition “Viva Latina!”. You may visit the entire (open air) photo festival free of charge until 17 October 2021 still.

“Viva Latina!” is a freely accessible, open-air photo festival in Baden near Vienna that you should not miss.

2018 saw the first festival edition in Baden, “I love Africa“, followed by “Hymn to the Earth” in 2019. The previous year took “All Eyes East“: Check out my linked blog posts for details about the previous photo festival editions here in Baden near Vienna. All photographs shown are by no means “just any nice photographs”: Among the listed photographers are winners of the World Press Photo Awards as well as internationally respected Peace Prize laureates. What I was particularly pleased about this year’s festival edition is that several winners of the “Global Peace Photo Award” as well as the “Children Peace Image of the Year” Award are also shown. The latter brings some very young up-and-coming talents to light!

Check out the initial part of the exhibition as part of the Baden “City Route”, which stretches from Baden’s Kurpark to the City Theatre, the Main Square, the Beethoven House and the Arnulf Rainer Museum. The “Garden Route”, on the other hand, takes you from the Tourist Information Centre at Baden’s Brusattiplatz, through Gutenbrunn Park to Doblhoff Park and its well-known rose gardens. This is perhaps the most impressive part of the photo exhibition in terms of the composition of the works amidst the thousands of roses, and the typically classical park landscapes of Baden.

Speaking of impressive: some of the works on display are mounted on Baden house walls measuring almost 300 square metres! On your tour of Baden, always take a good look around to make sure you don’t miss any of the approximately 1,500 subjects by over 30 photographers in Baden’s city centre and parks. 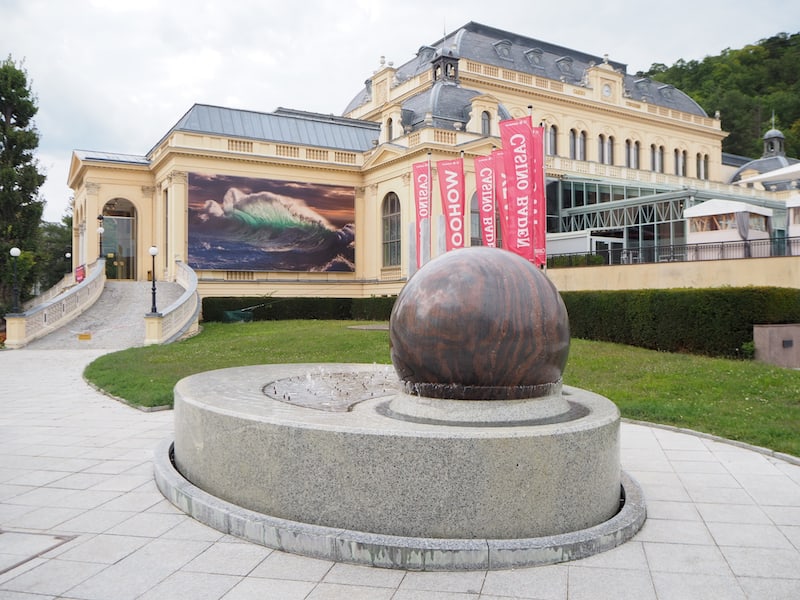 Impressive: Mounted landscape photographs under the CEWE Photo Award “Our World Is Beautiful” … 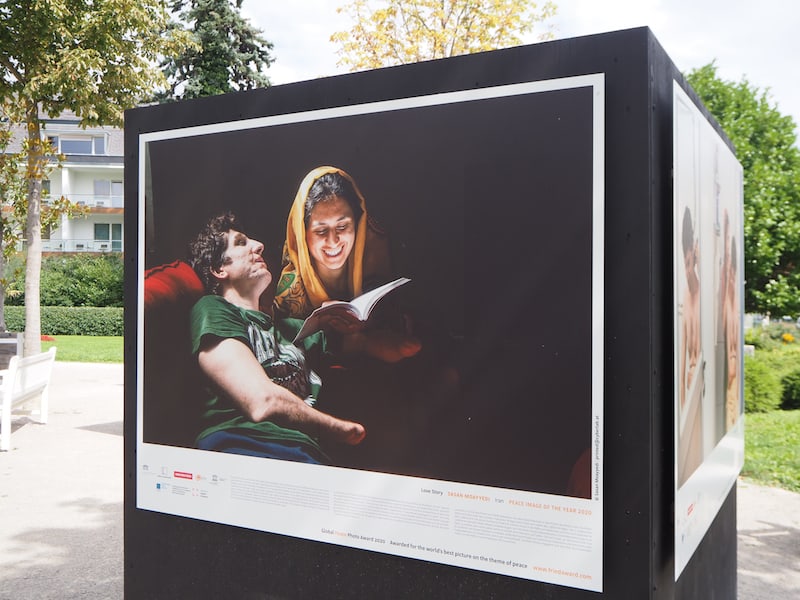 … and I just love the winning photograph of the “Global Peace Photo Award”, asking just how peace may look like. 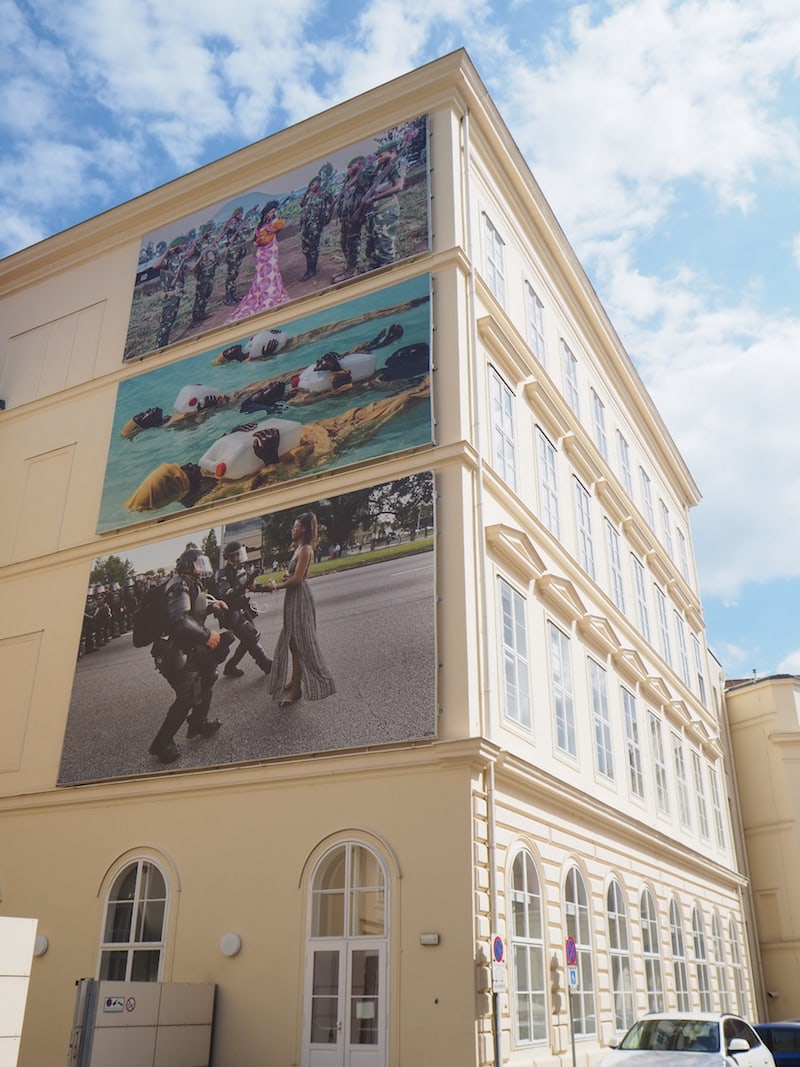 On your way to town, do not miss these impressive photo walls by the Badener Stadttheater either … 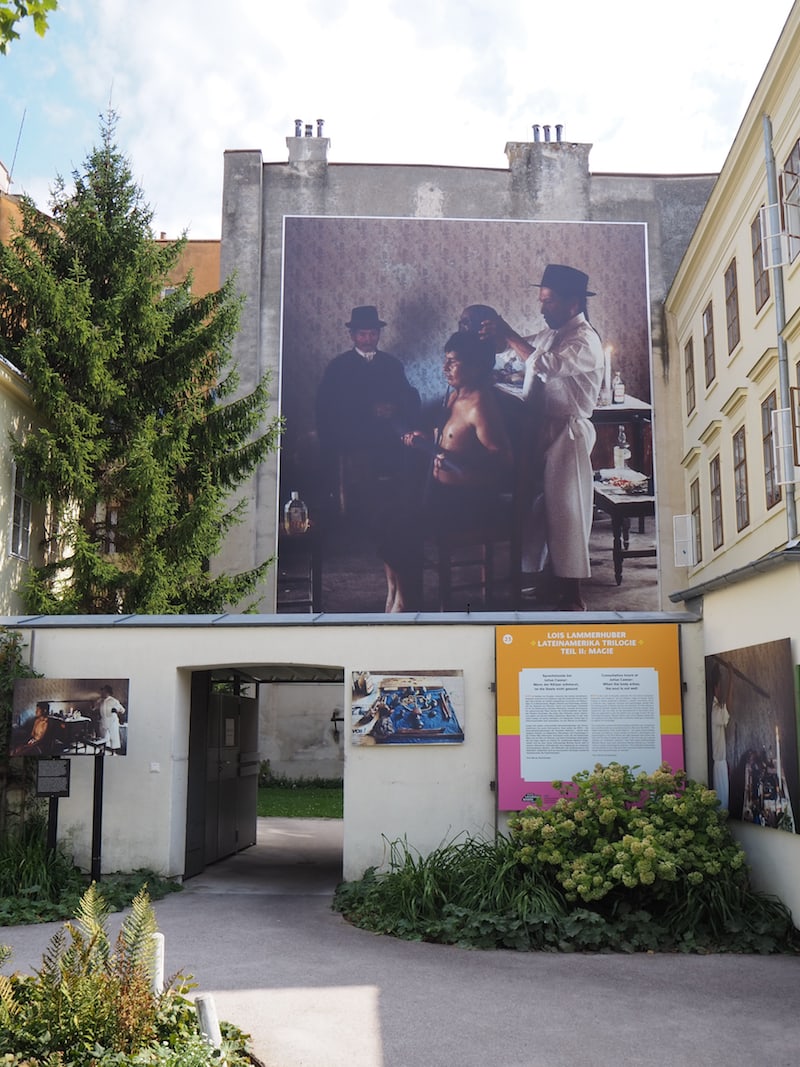 … Lois Lammerhuber, the photographical mastermind behind the Baden photo exhibition, gives a debut of his portrait series from Latin America taken in the 80s and 90s of the previous century … 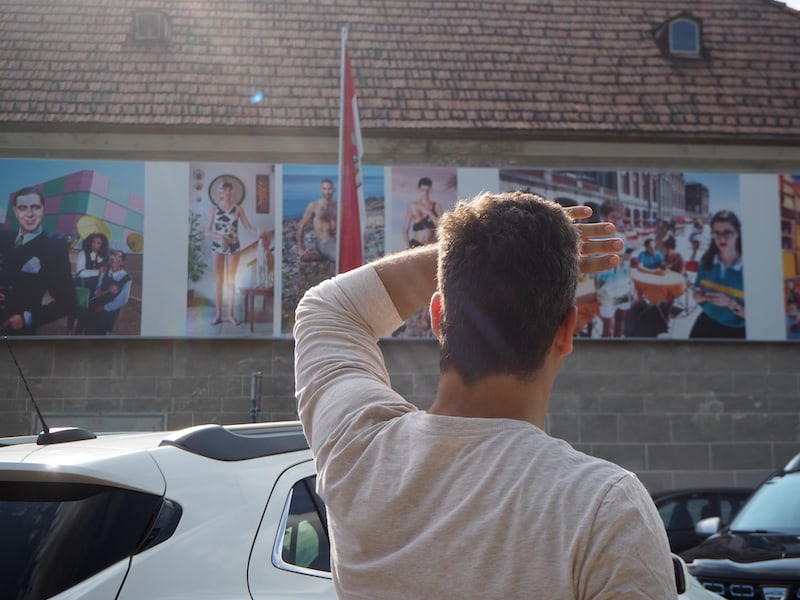 … we continue to the Brusattiplatz main square and start an almost philosophical discussion about the works of art, and photographs, taken by Argentinian photographer Marcos López: “Pop Latino” … 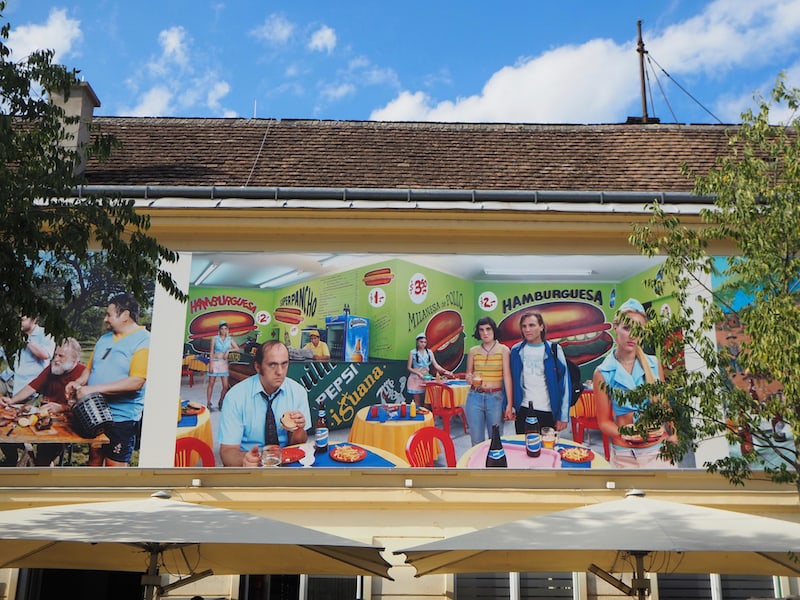 … do look closely not to miss anything here! 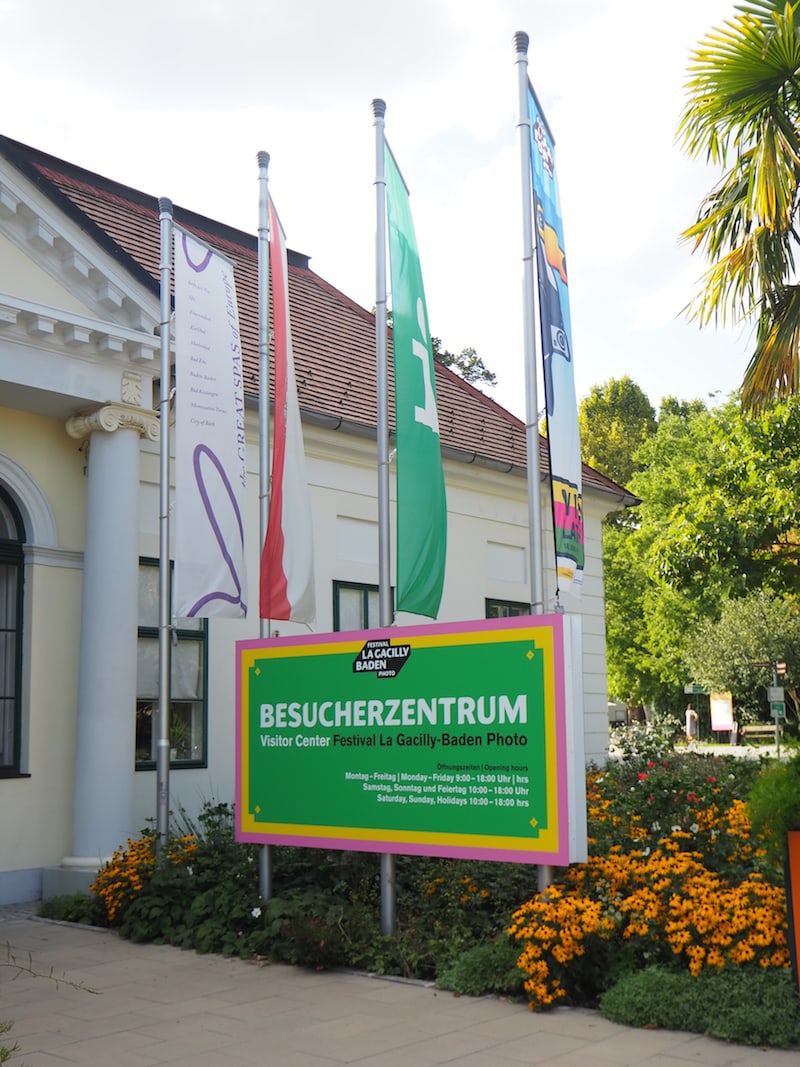 The visitor center, by the way, is your best spot for asking questions about the festival, for getting directions and for asking about regular, guided tours also. 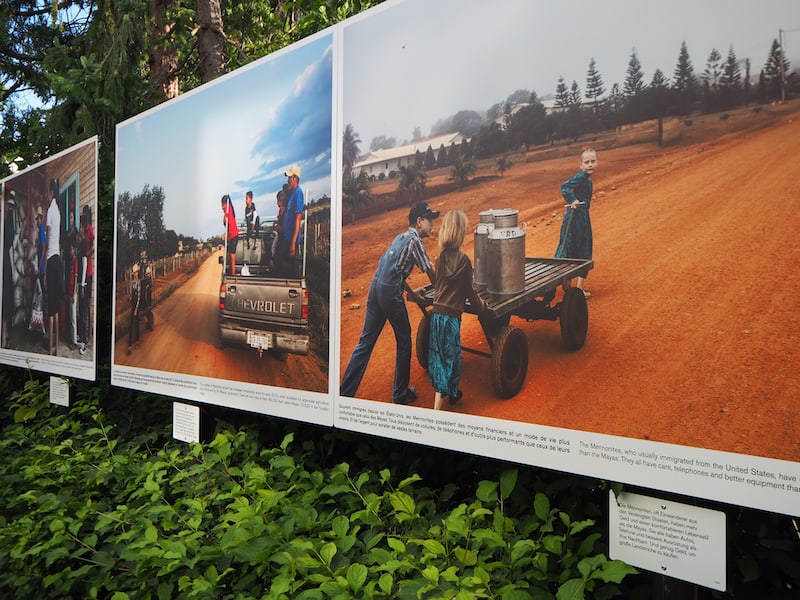 We continue over to Gutenbrunn Park: Here, photographer Nadia Shira Cohen dedicates her work to the “Honey of the Gods”, a delicate situation where the Mennonite people, immigrants from the USA, are contesting land – and thus traditional honey-growing areas – from the indigenous people living in Mexico. 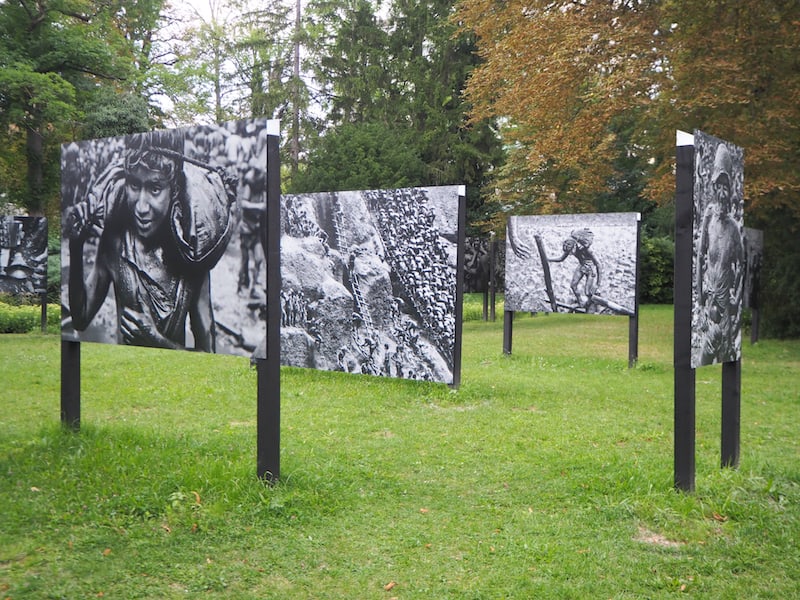 Further inside the park, we marvel at the fascinating black and white photography by Sebasitão Salgado, called “Gold”, which gives testimony to early miners in the gold rush of South America over 100 years ago. 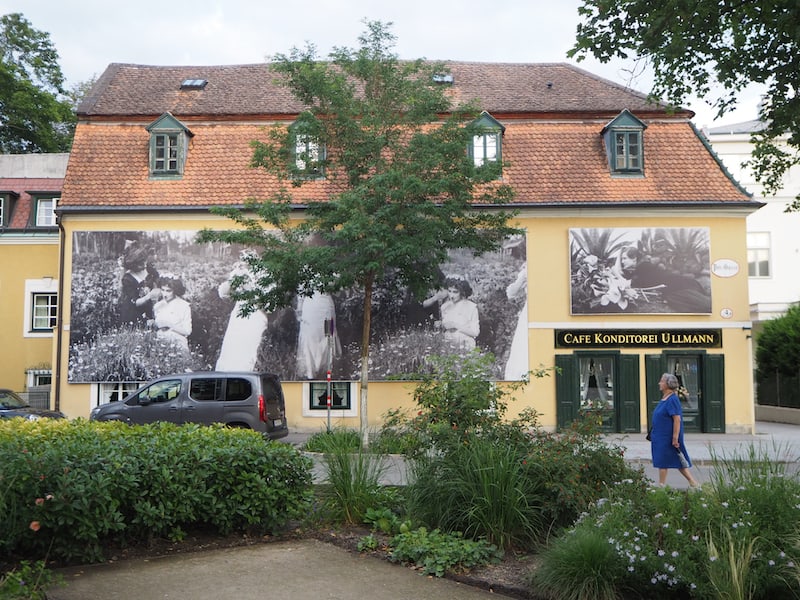 Historical photographs from the 1920s are also displayed on the exterior of Café Ullmann, one of my favourite spots for the large-scale photographs during the festival. 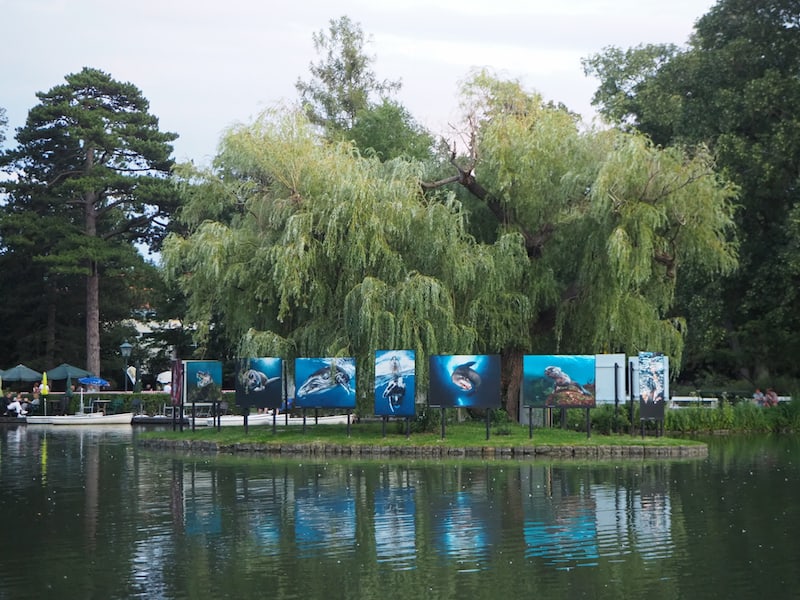 Finally, in Doblhoff Park, another “Swimming Gallery” is hosted again this year: in keeping with the theme, breathtaking underwater pictures and sea creatures are on display directly at and on Doblhoff Pond. 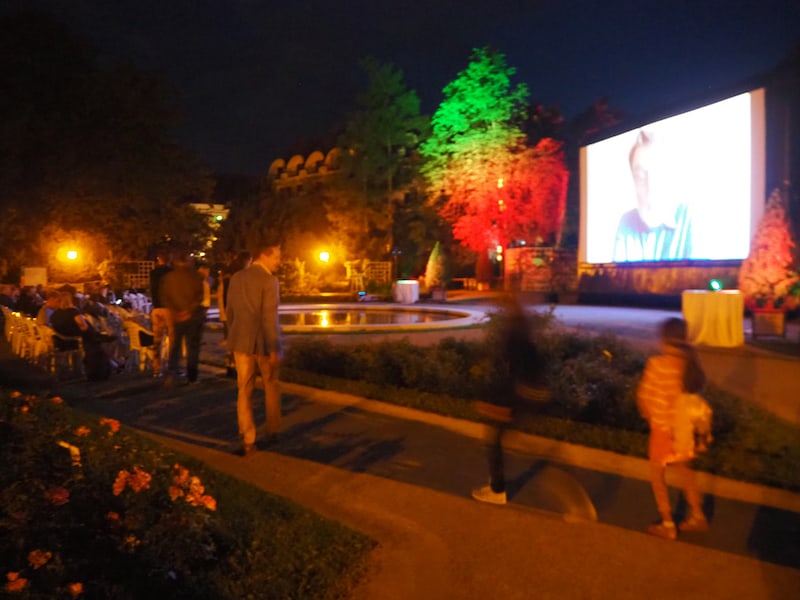 This year’s festival visit ended with the “Terra Mater Film Days”: At the Orangerie of the Doblhoff Park, we enjoyed the feature film “Wie Brüder im Wind” (Like Brothers in the Wind), which thrilled us with its visually stunning shots as well as its leading actors, including Tobias Moretti and Jean Reno.

Our hotel “At The Park”: An ideal base to explore the Festival La Gacilly-Baden Photo.

“At the Park” really hits the spot: The hotel is located right at Baden’s famous Kurpark. Even from our room, my husband Georg and I have a fascinating view of the first few photographs of the festival; at lunchtime and in the morning, we also enjoy excellent meals. I can only recommend you to stay here, enjoying the modern and at the same time very cosy interior, as well as the friendly host and team. 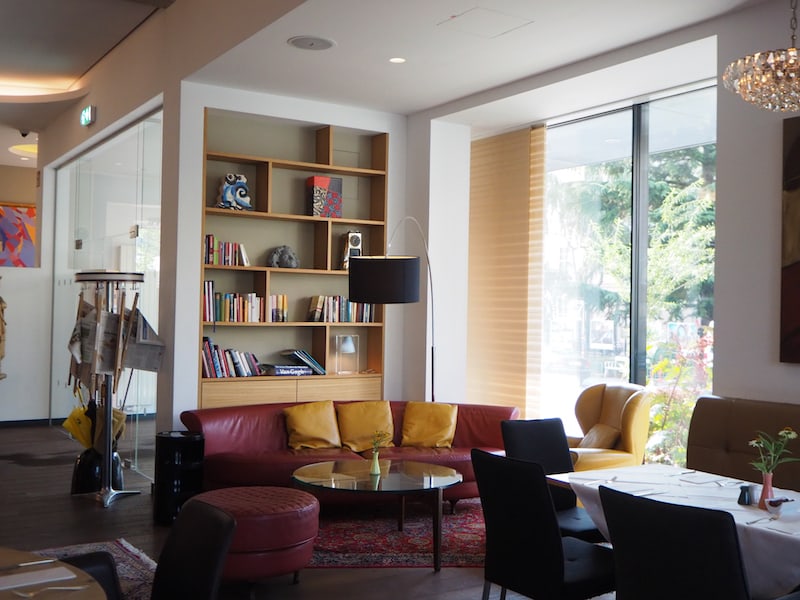 Arriving at our hotel “At The Park” in Baden near Vienna … 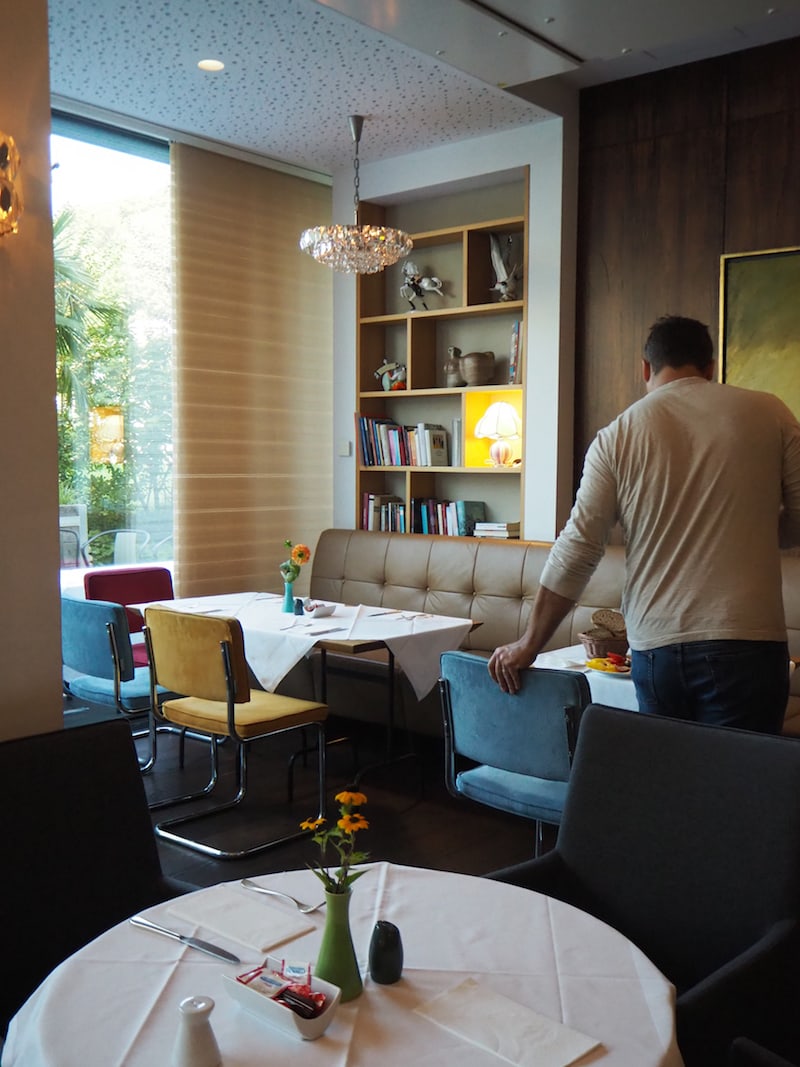 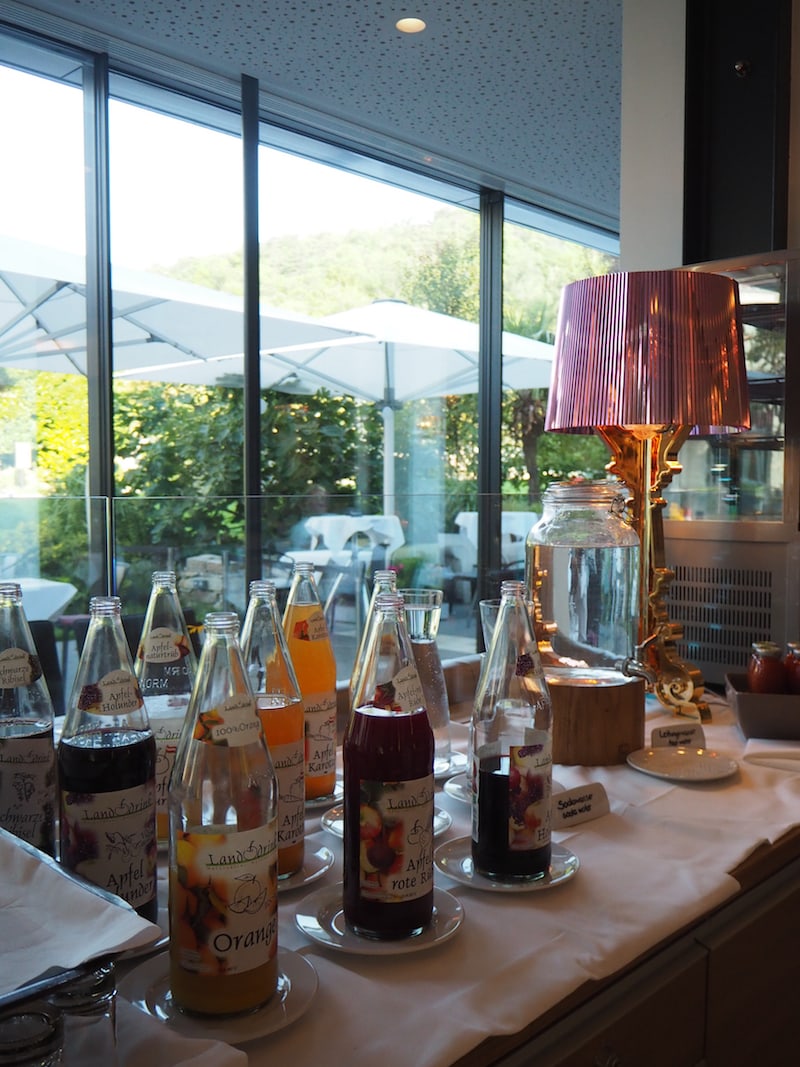 … including lots of local and regionale produce, such as these natural juices … 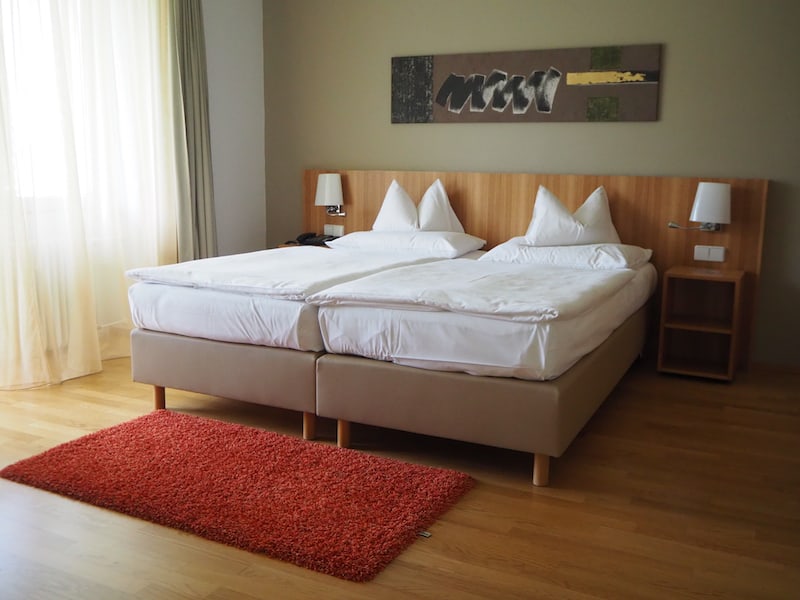 … the rooms, too, are very comfortable indeed … 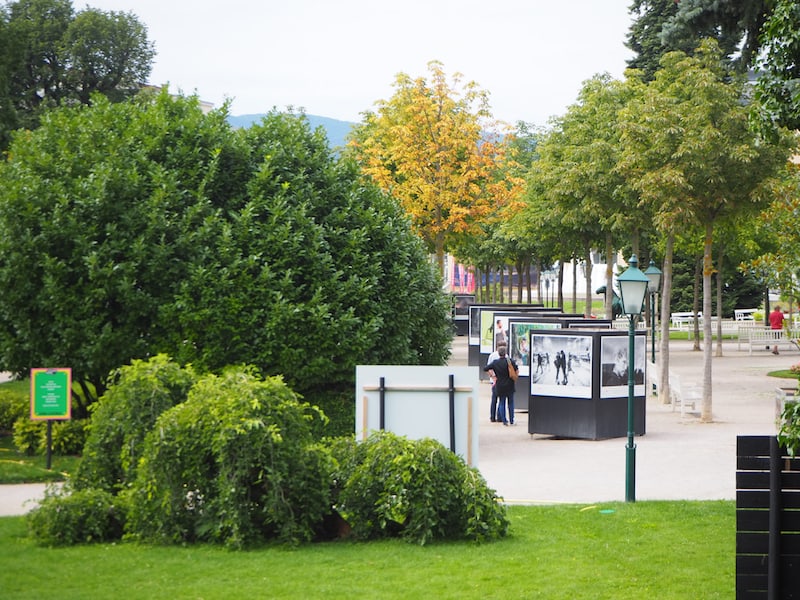 … and check out the view from our room: We are right where the magic, i.e. the photo festival happens!

What an award! The town of Baden near Vienna spent many years preparing for this prestigious listing. Among eleven other European spa towns, Baden was finally included in the UNESCO World Heritage List. The “Great Spa Towns of Europe” include renowned cities such as Vichy in France, Bath in England or Baden Baden in Germany. Read more about the award and ceremony here. Congratulations, Baden!

Around Düsseldorf & Cologne: The “Bergische Kaffeetafel” as...

NOW is always the best time to do...