Photo Festival #LaGacilly in Baden near Vienna: “All Eyes East” in 2020.

For the third time now in 2020, the city of Baden near Vienna is hosting the “Festival La Gacilly – Baden Photo“, the largest open air photo festival in Europe. This year’s festival bears an exciting promise, calling “All Eyes East” to Baden. Thus, the city of Baden along with its parks and city centre converts into a major open air display for some of the world’s best photographers and exhibitions. The galleries are over seven kilometres long, portraying different aspects of life on planet Earth, the environment, its beauty but also its (man-made) destruction, human stories, as well as travel and geopolitical science issues. You may still visit the open air photo festival #LaGacilly until 26 October, 2020. 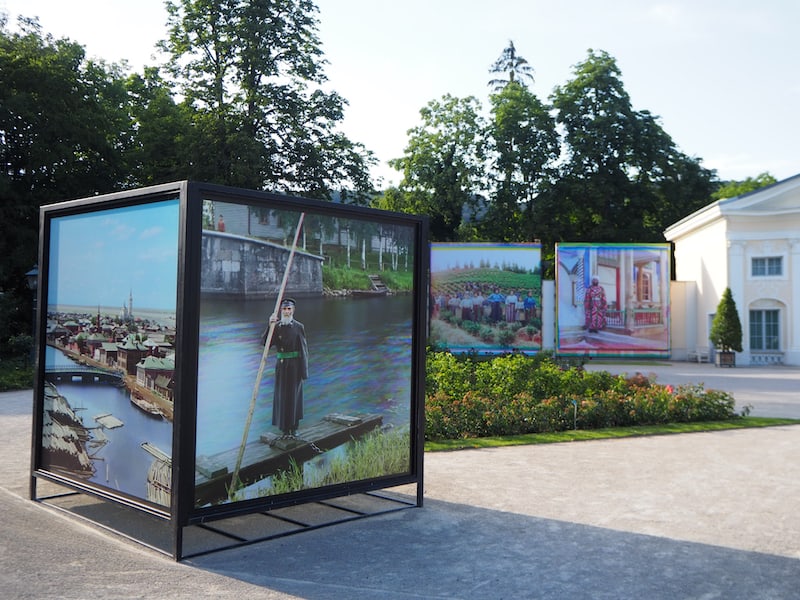 Picture gallery in front of the Orangerie at the rosarium in Doblhoff-Park, Baden.

There are two major arguments for visiting the festival “La Gacilly-Baden Photo” this year: It is perfectly fit to visit at a social distance, and completely free of charge.

The city of Baden, besides being host to this major photo festival, is also known for its thousands of roses! After a small afternoon shower, their fragrance is even more wonderful to the nose. Right inside the famous rosarium, you can view some of the exhibition’s most prominent photographs, bewitching you with their intensity, beauty or oddity. The entire composition of a classic park landscape mixed with breathtaking, world-renowned photographs from predominantly Eastern and Central Europe is definitely unique, and something that you really should see. Even inside the small city centre of Baden, you can glimpse larger-than-life size photographs being mounted on house walls, a true contrast to the imperial flair of Baden. As I already mentioned, the photo festival is completely free to access. Check this out. 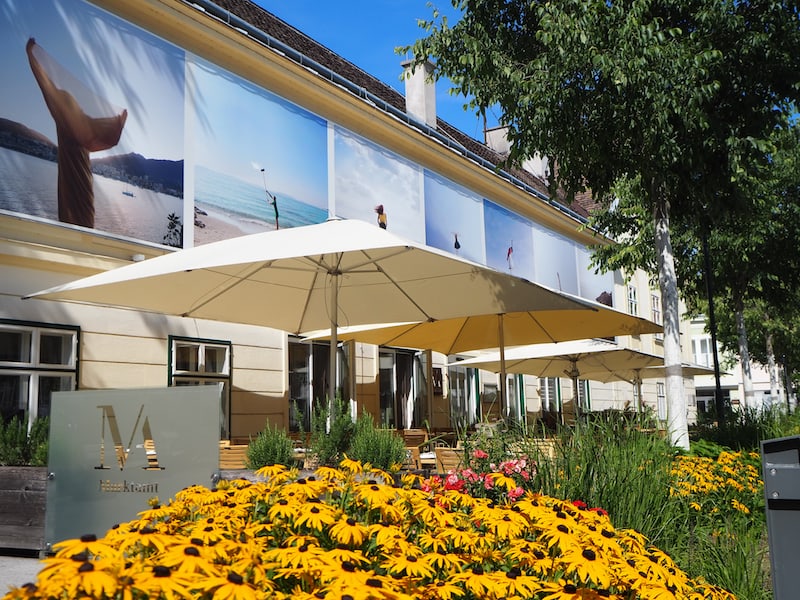 We start our tour of the stunning photo festival at the Brusattiplatz square in front of the former Leopoldsbad, now home to the city’s tourism office  … 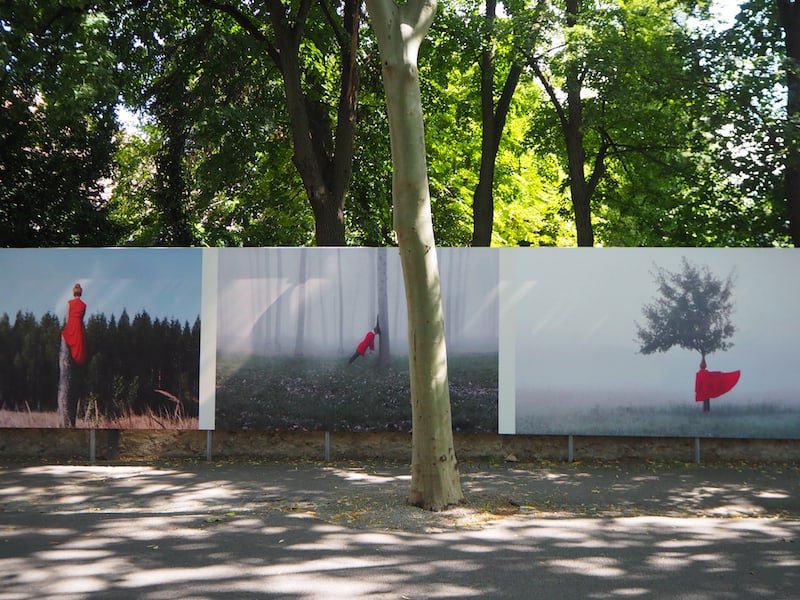 … with a gallery of the French artist Maia Flore, who enchants us with her artistic view of human interaction with the environment. 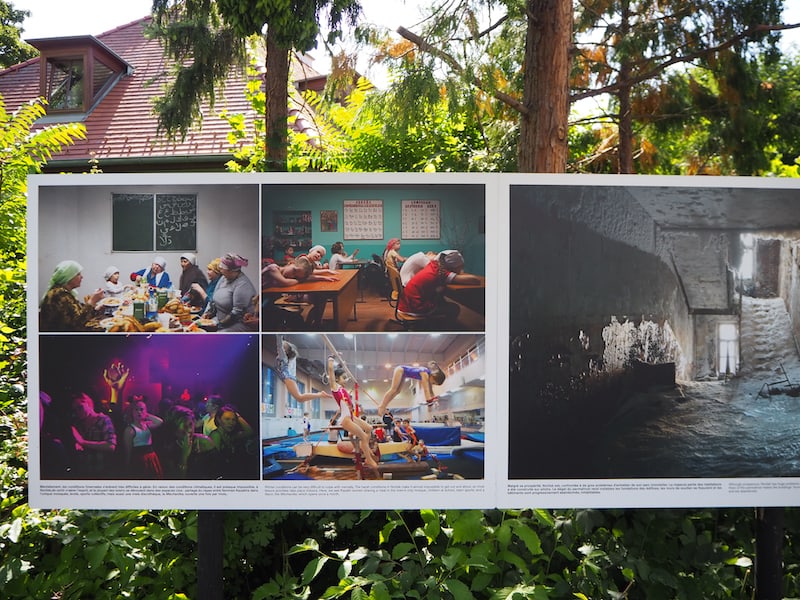 At Gutenbrunn Park, we are bewildered and stunned by a photographic exhibition about the town of Norilsk, in North-Eastern Siberia, portraying everyday city life of people who live in and have to deal with extreme environmental surroundings. 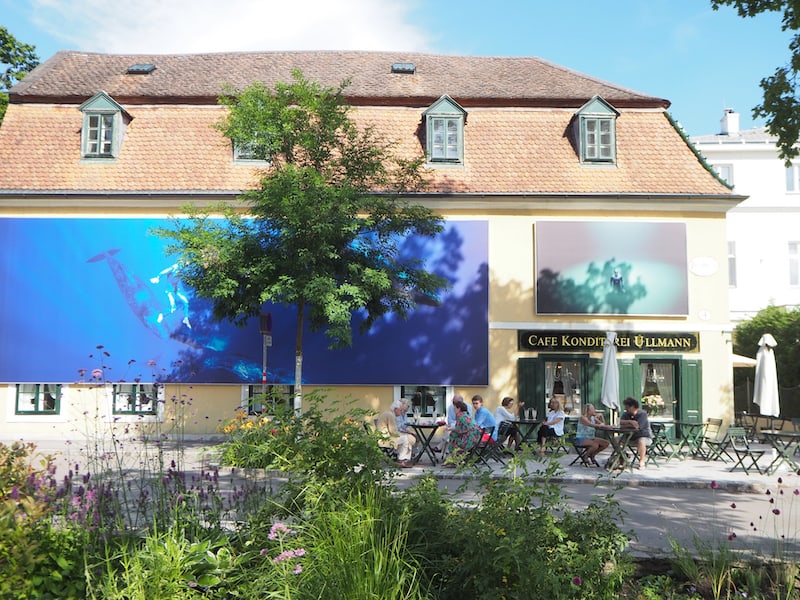 A little further, right above the coffee shop Konditorei Ullmann, you may view underwater photographs of so-called apnoea divers, who with one deep breath can reach dizzying depths. 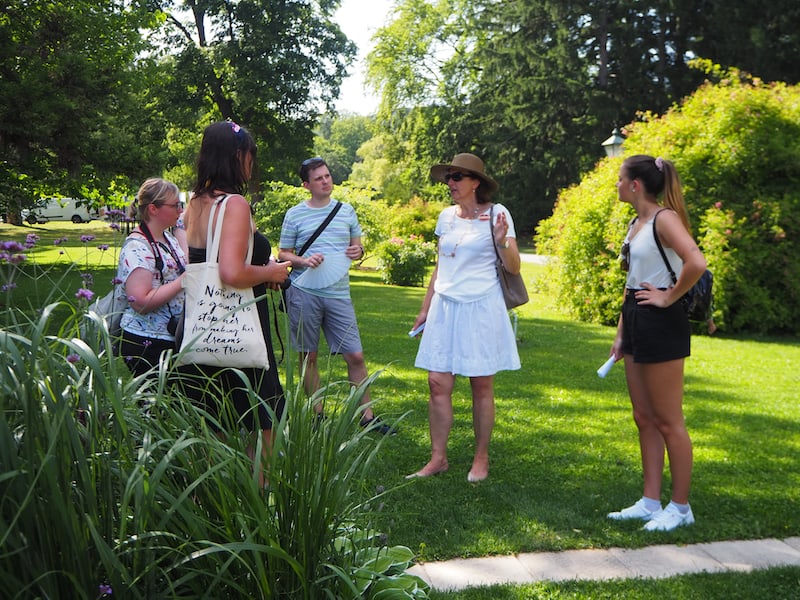 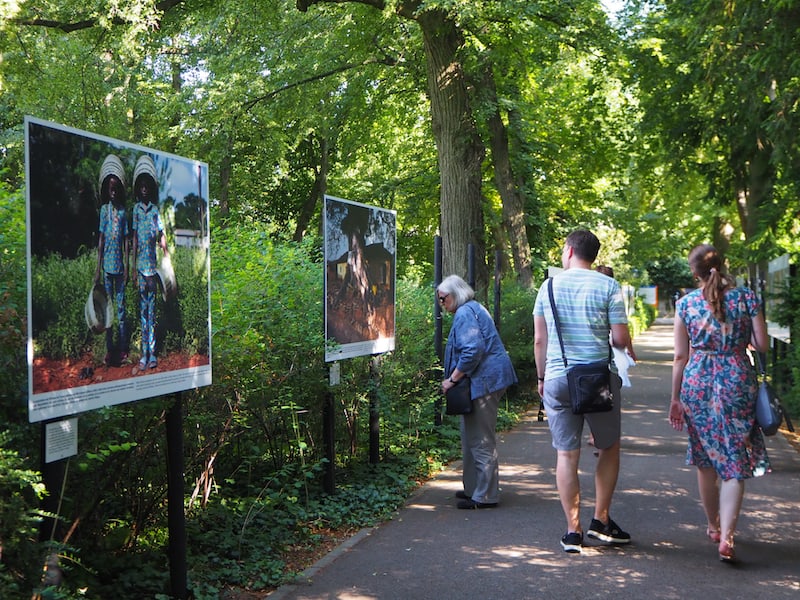 … and I recommend you take your time, ideally at least a few hours, to really soak up the life and details of each of the stunning images of the Baden photo festival exhibition. 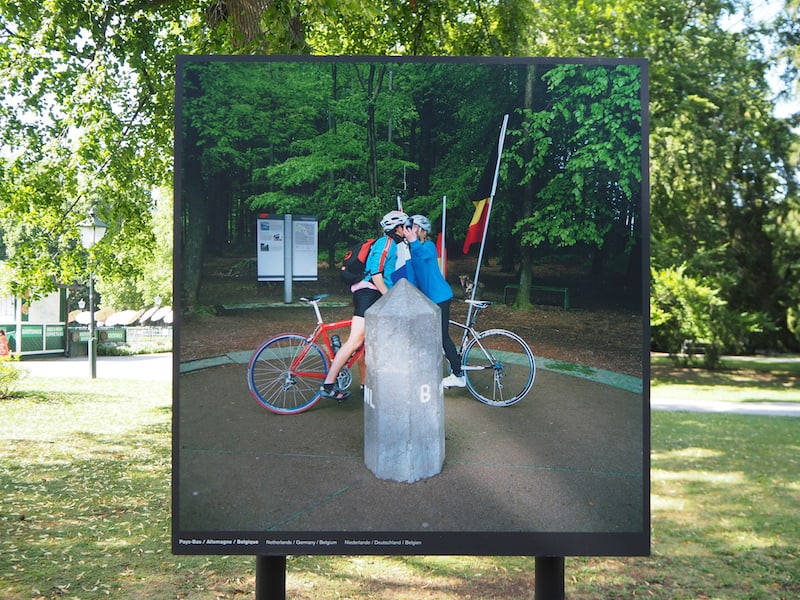 Just a kiss, right? This photo shows a border between Belgium and the Netherlands where there seemingly is none … or is there?

So how does Europe’s largest open air photo festival end up in the city of Baden near Vienna?

“La Gacilly”, as you might already guess, originally hails from France, from a tiny community with the same name and an outstanding mayor: Yves Rocher. 16 years ago, he had the idea of gathering some of the world’s best photographers in La Gacilly, France, in order to advocate the beauty but also the (often man-made) destruction of our planet Earth. Meanwhile, Lois Lammerhuber, who now is the official festival director for the city of Baden, himself a great fan of the French photo festival, convinced his fellow citizens (and politicians) to continue hosting this festival in Baden: Each year after the photo festival has taken place in France, it is then moved to Austria to be shown there during the following year. In 2018, it was called “Africa”, in 2019, “Hymn to the Earth”, and right now, “All Eyes East”. 2021 will focus on “South America”, currently already taking place in La Gacilly. I am already very curious for when it comes to Baden!

Things to do in Baden besides visiting the photo festival: Taste local wines at the Badener Hauervinothek, participate in a Kaiserschmarren show, check out the Arnulf Rainer museum or do a moonlight picnic …

… you name it, Baden has it. At least, this is how we see it. For many, many generations, the city has been able to cultivate a certain atmosphere that revolves around “l’art de vivre“, or joy of life. It has likely started with the Romans building a first settlement here upon discovering the healing thermal mineral waters, waters that are still used for treatment today such as at the “Römertherme” Roman Spa, or the “Thermalstrandbad” open air pools (both are recommended to visit). 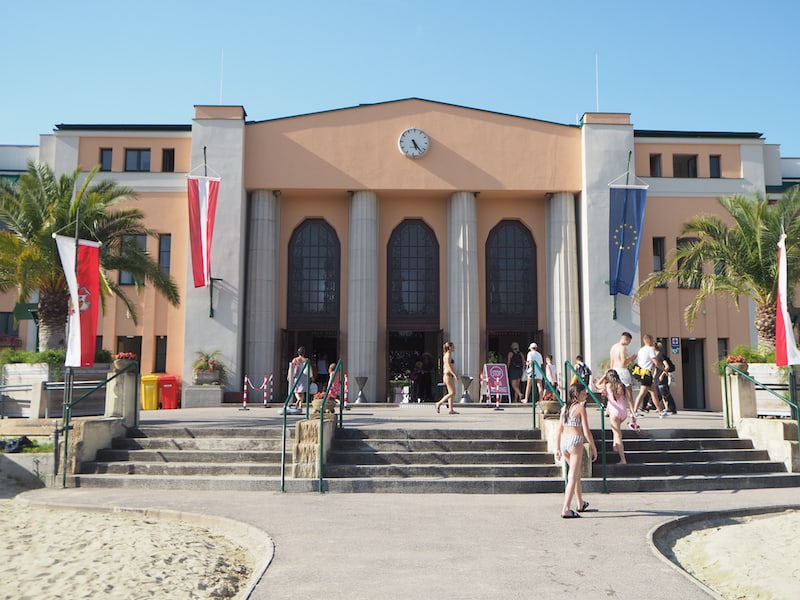 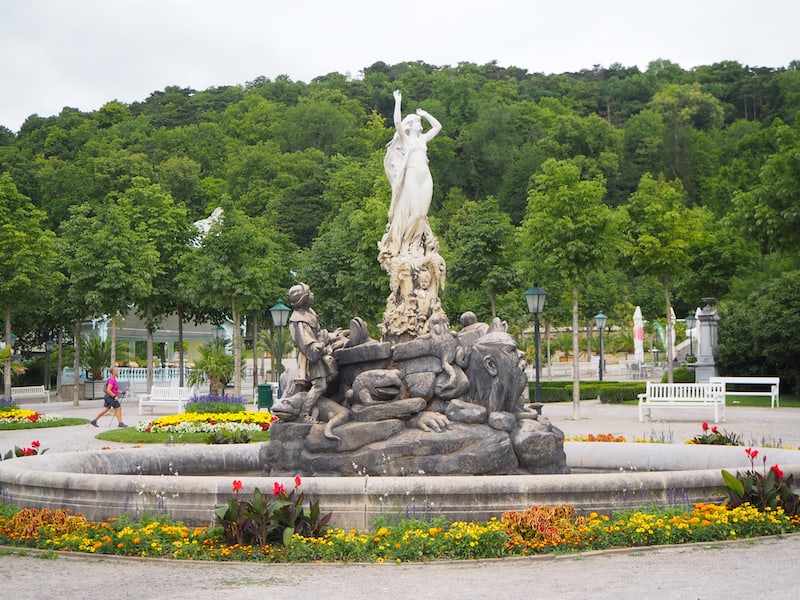 Wherever you turn, water is never far in Baden, such as at the Undinen fountain at the Kurpark Baden.

Let’s take a jump in history, towards the more recent imperial age and the time of great musicians, such as Beethoven or Strauss. Still today, you may find many of their traces in the city of Baden, and I can truly recommend you visit the Beethoven museum (I have already told you why here). This time round, we visited the no less stunning Arnulf Rainer museum, which offers a unique blend: The former public bath buildings are now home to a modern art museum. 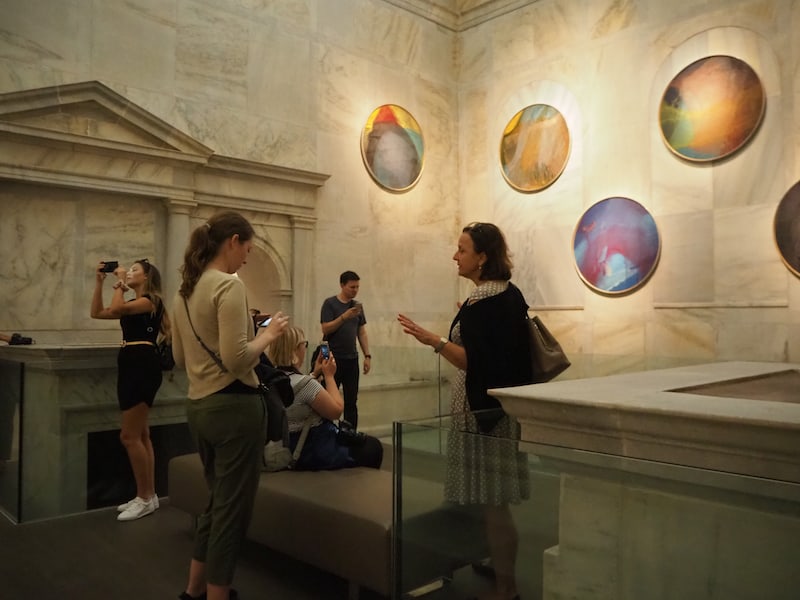 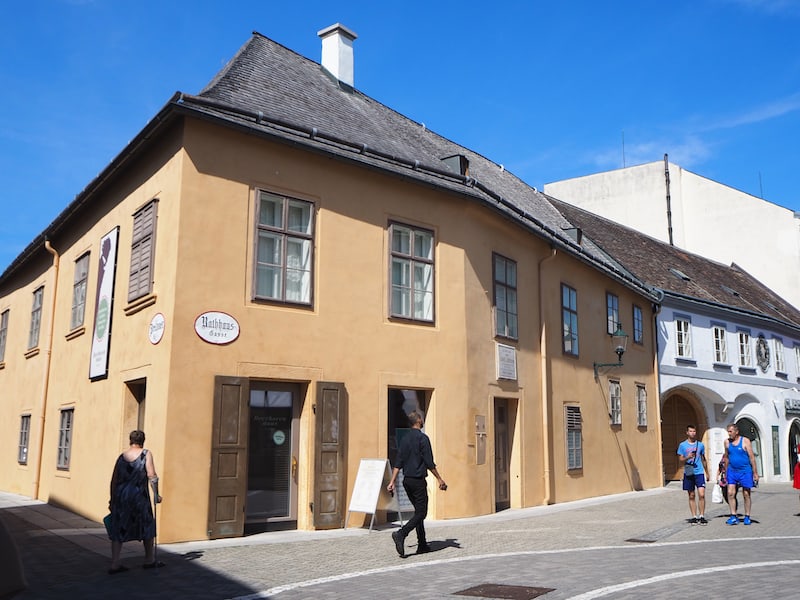 Do not miss a visit to the Beethoven museum, either, paying tribute to one of the greatest musicians of all times, who came here regularly.

During the last couple of decades, the city of Baden has definitely rejuvenated, and this is likely due to a whole number of festivals and events that engage people from all walks of life. Among them are a cosy moonlight picnic at the Doblhoff park, or a so-called “Kaiserschmarren” show at Herwig Gasser’s coffee shop, complete with its former, original imperial bakery. We love learning all there is to know about the history of the “Kaiserschmarren”, and more so tasting one of Austria’s most famous dishes ourselves. In a cooking demo, you can watch the local master chef preparing a Kaiserschmarren himself. 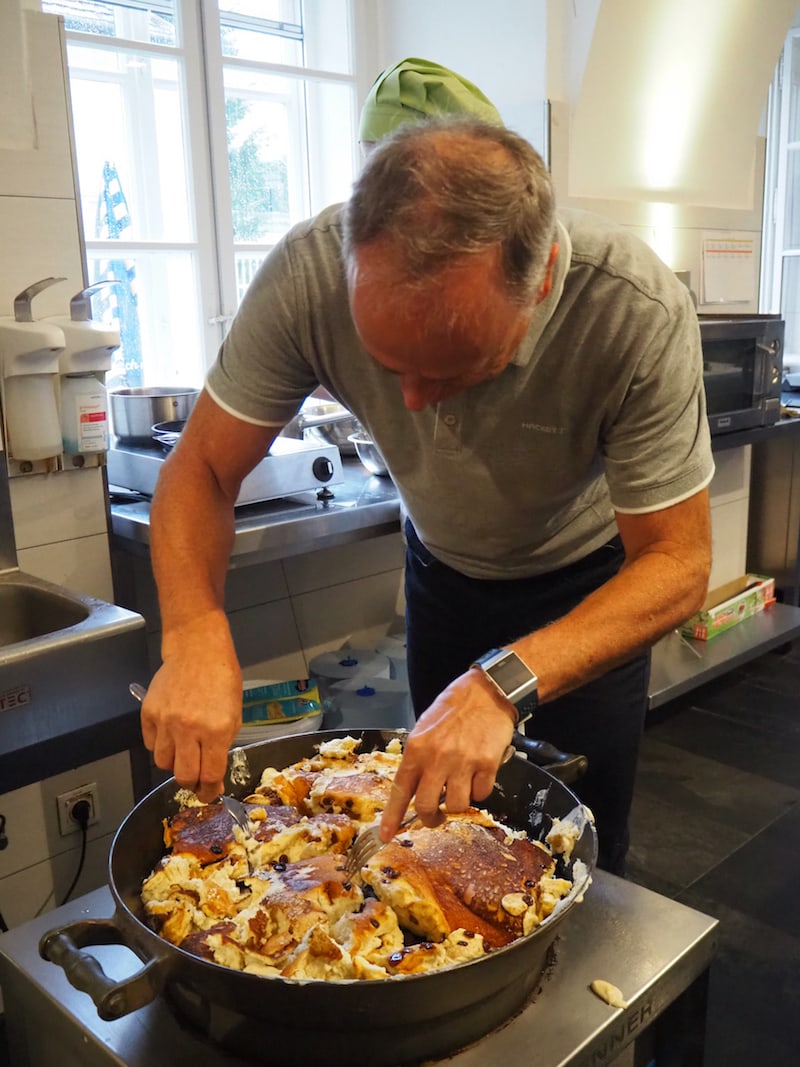 Kaiserschmarren just as the former Austrian Emperor would have liked it … 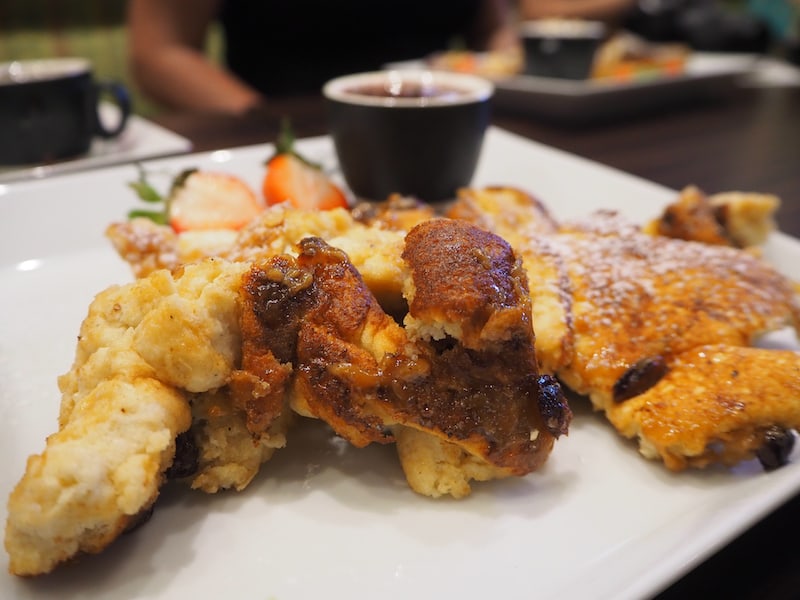 … whatever way the story goes, it’s true that we have enjoyed our modern version a lot! 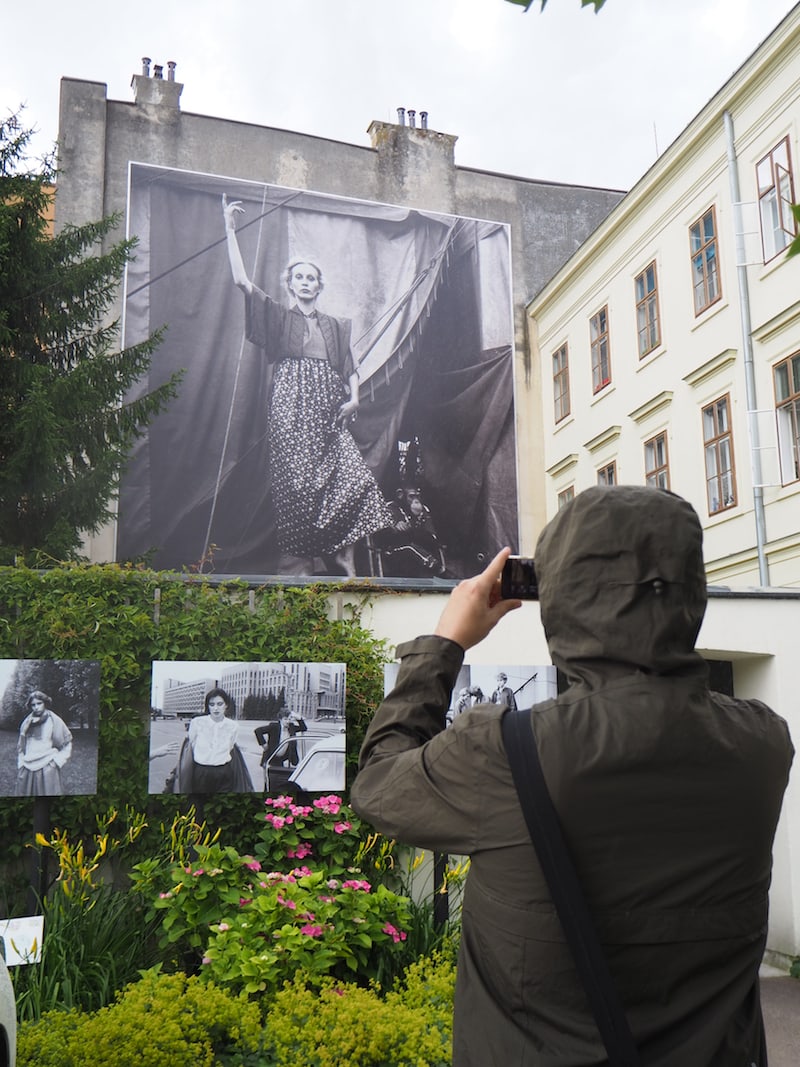 Tip: If you cross the courtyard behind the actual coffee shop, you may visit one of the largest photos mounted in the Baden photo exhibition this year. 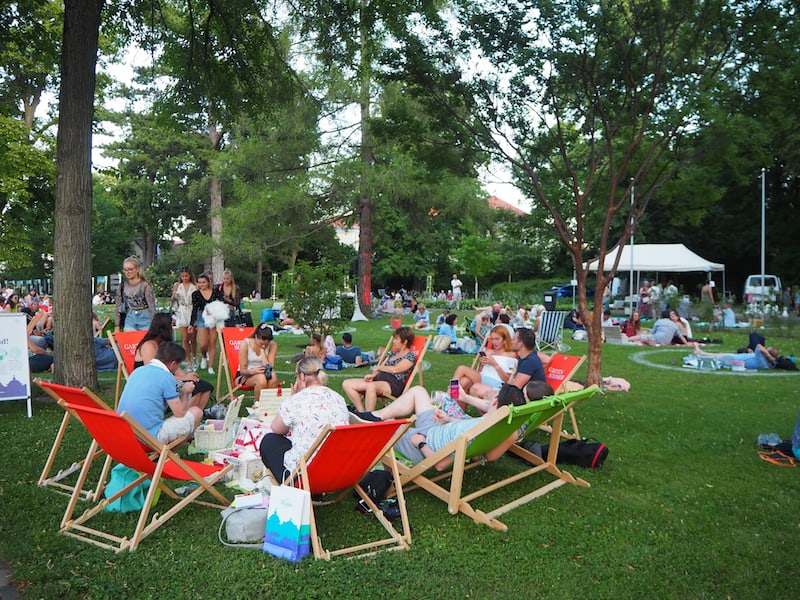 The Baden moonlight picnic is worth the mention, too … 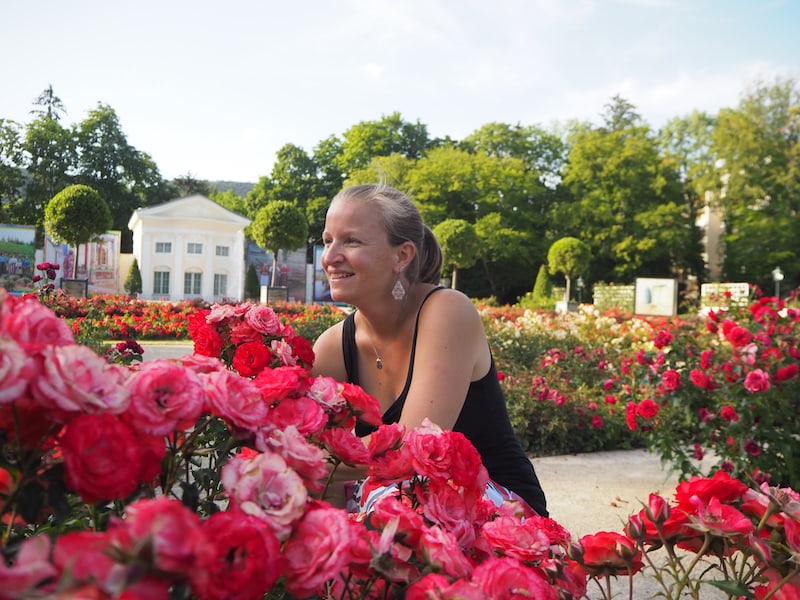 … as is taking a “bath” in the park’s large rosarium! 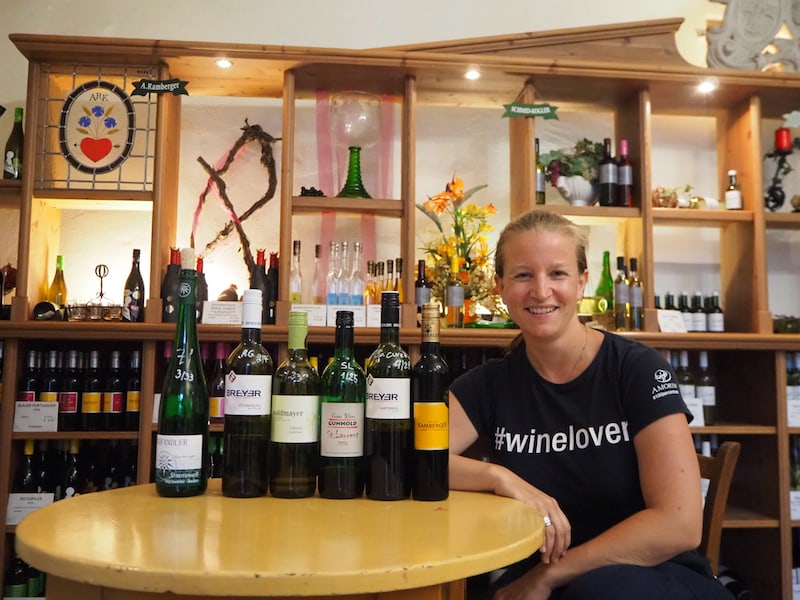 Last but not least, I can recommend you to head over to the local area wine shop, where tastings of the autochthonous grape varieties, such as Rotgipfler and Zierfandler await all #winelover connoisseurs … 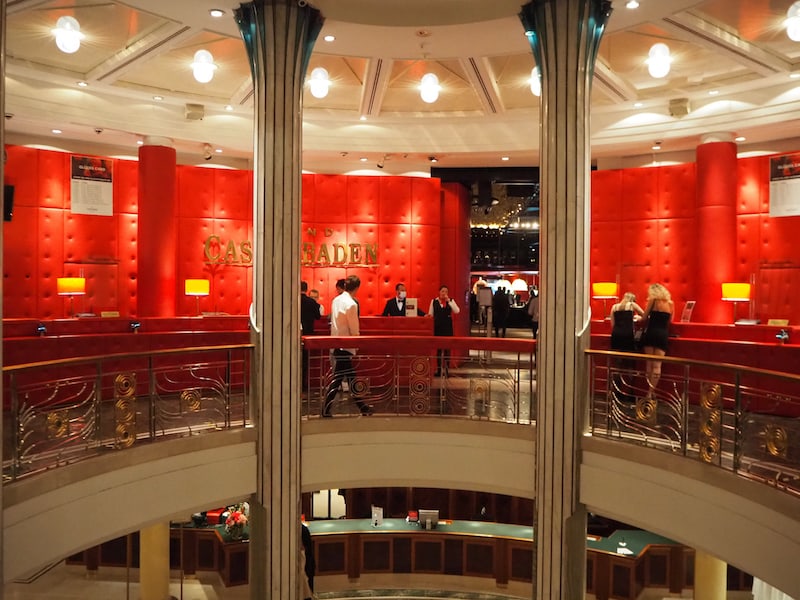 … if you’re here, make sure you visit the Casino Baden as well … 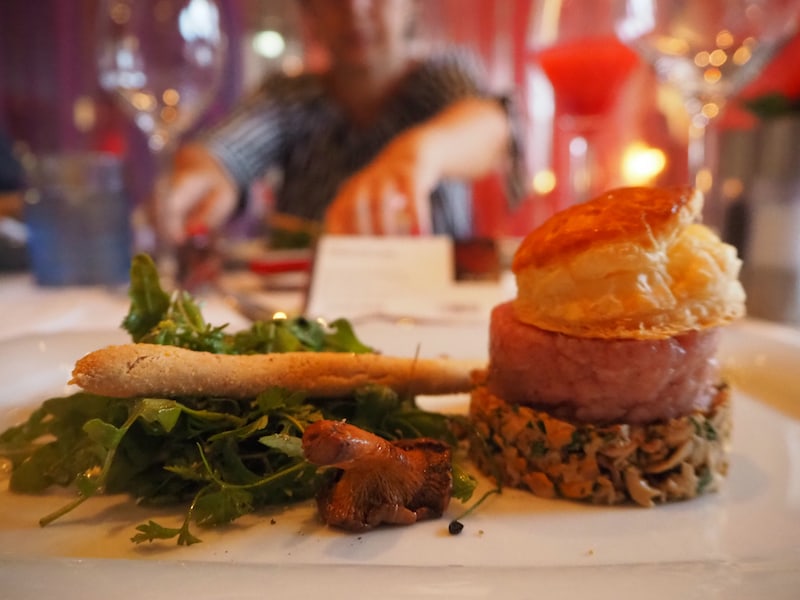 … “Dinner & Casino” is a delicious way of doing so. 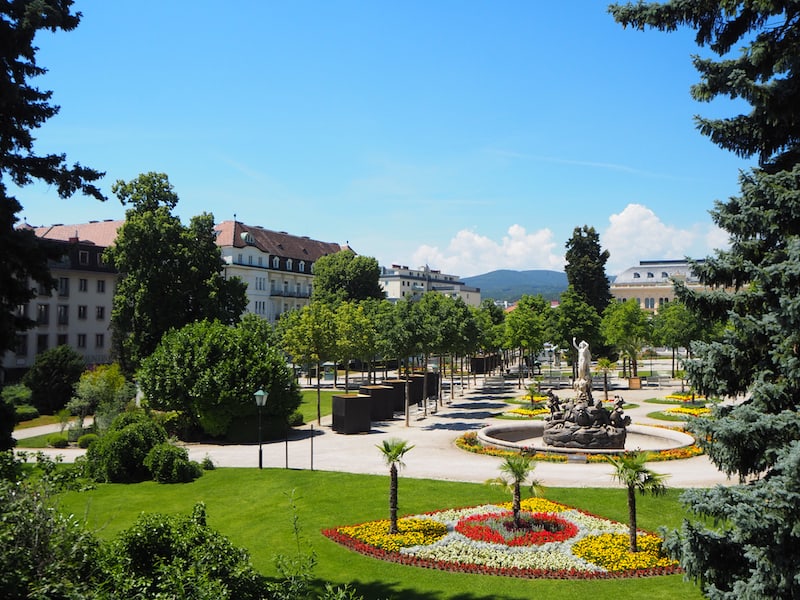 As for accommodation, I can recommend you stay “At the Park”, a comfortable, modern hotel offering spectacular views over the Kurpark Baden (this is the view, for instance, from my room on the second floor of the main building!). 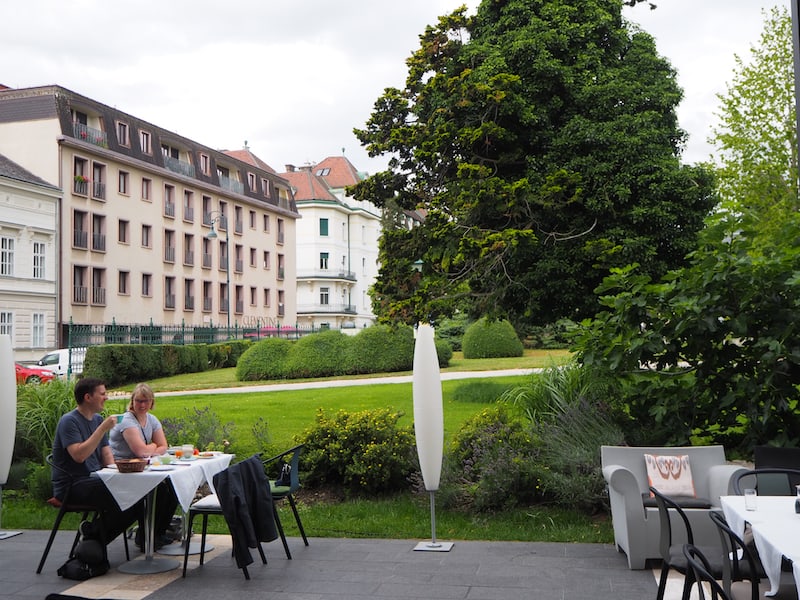 Breakfast is lovely sitting right by the park.