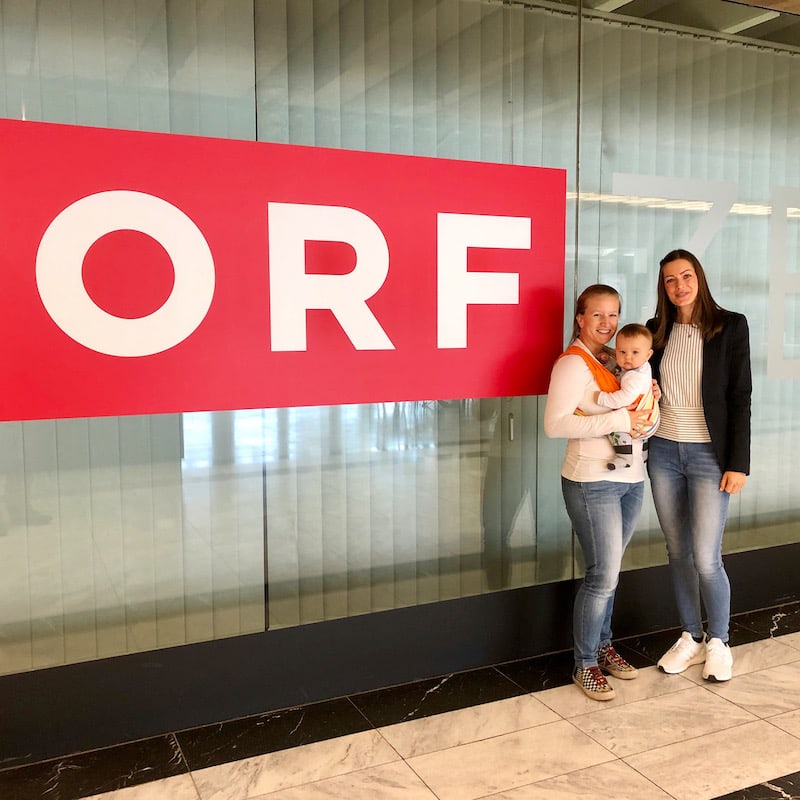 At the ORF Broadcasting Centre in Vienna, I pose in front of the camera with baby Liam. I was invited here to discuss all the details of my second TV feature, including a feature on travelling with children.

From April 2019 to April 2020, I appeared on national TV a total of three times. The formats were different in each case (once I even made it into the main news!); however, the central theme is and remains travel.

Statistics assured me that all contributions were seen by more than one million people. That makes me a little proud! 😀

Unfortunately, the Austrian National Broadcasting law does not (yet) allow TV features to be shown longer than seven days after broadcast: In the media database of the ORF, the “TVThek”, only the most recent features can be found. As soon as this law changes, I can hopefully link, even embed, all of my TV spots here! 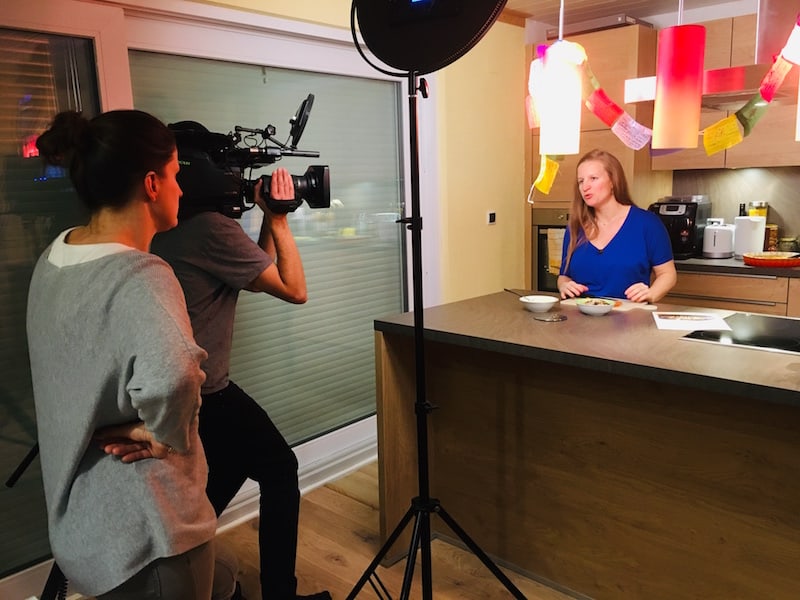 My dear, I can tell you: It is quite an exhausting task to stand in front of the camera for a whole day of shooting at six months pregnant, say intelligent things and bake at the same time! 😀 In the above photograph, check out our preparations for my first TV feature, which we shot right inside my kitchen. I talked about my love for New Zealand, baked a typical Carrot Cake and published my original New Zealand recipe as part of the feature. Furthermore, TV producer Yvonne Lacina and I talked a lot about “what the world has taught me”, the name of the new feature. What I took home from my travels and also what I wished for the upbringing of my then unborn child. Quite a lot, I would say!

The second TV feature followed about half a year later. It was filmed in December 2019 and shown on the occasion of the Vienna trade show “Ferienmesse” as part of the “Guten Morgen Österreich” breakfast TV channel in January 2020. Julia Zeidlhofer, the producer, asked me about my everyday life as a travel blogger, the kind of tips I had for travelling with children and what sort of travel plans we had for 2020: Unsuspecting the Corona pandemic, I was still full of anticipation when I told her how much we were looking forward to our one-month trip through Portugal and Spain with baby Liam! Luckily, we were still able to realise that trip in early 2020. 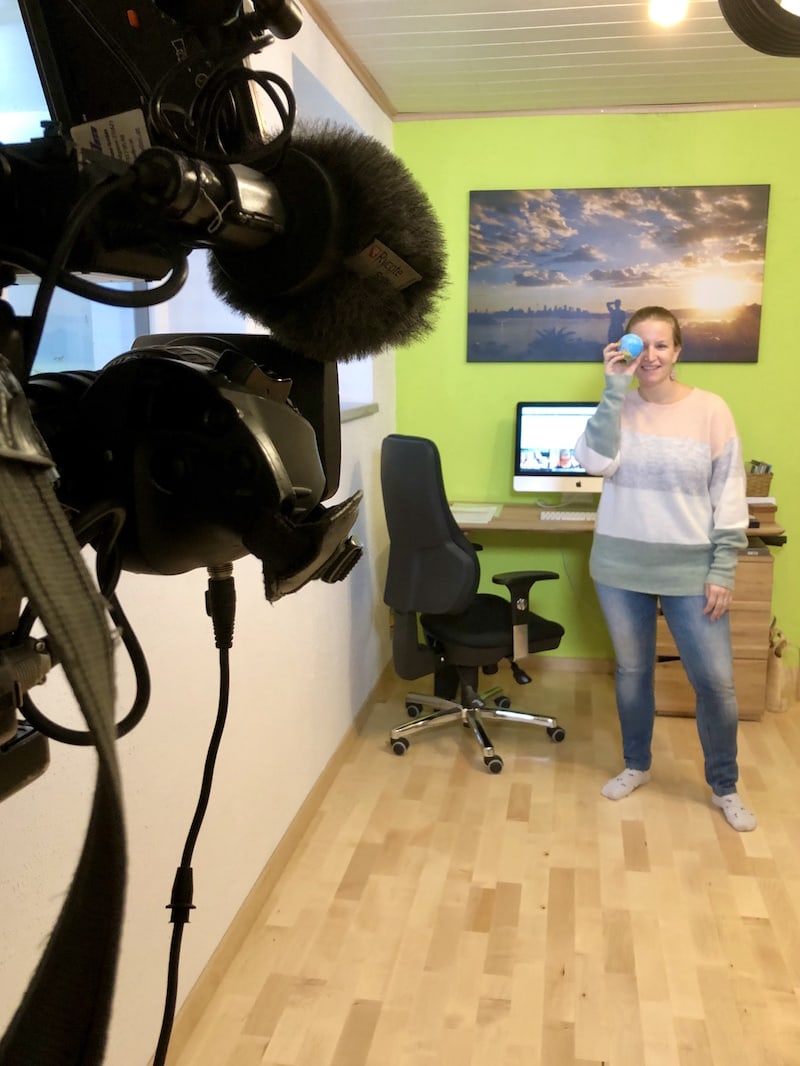 Shooting at our family home: “The world is my oyster” … 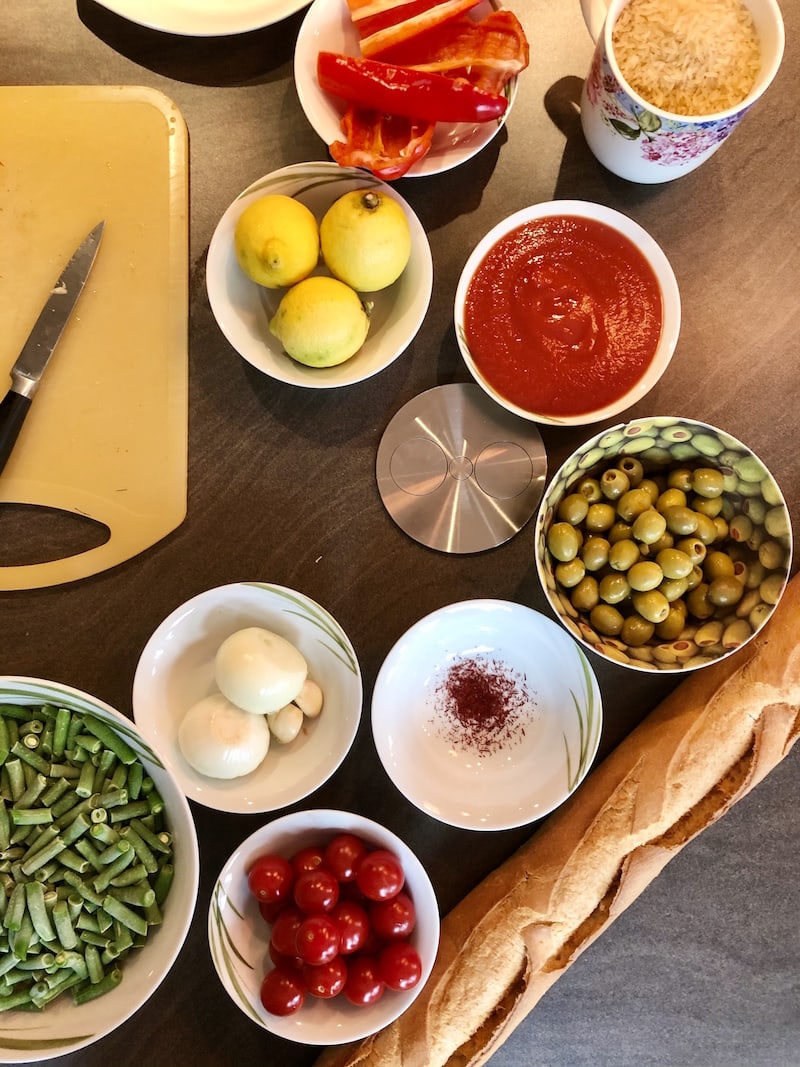 … and realising the carrot cake baking went really well on my first TV feature, I suggested we do another round of cooking this time: Spanish Paella … 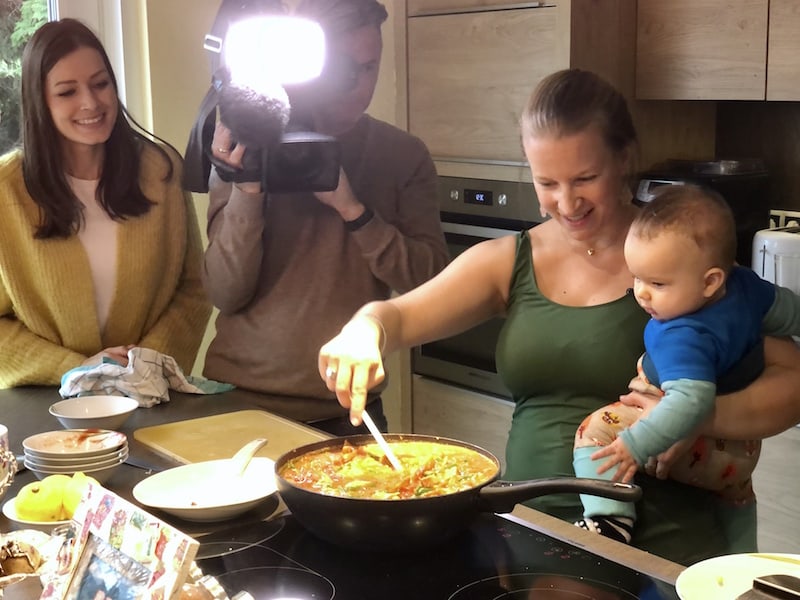 … Liam, my now greatest critic and kitchen hand, loved watching me back then already, barely half a year old … 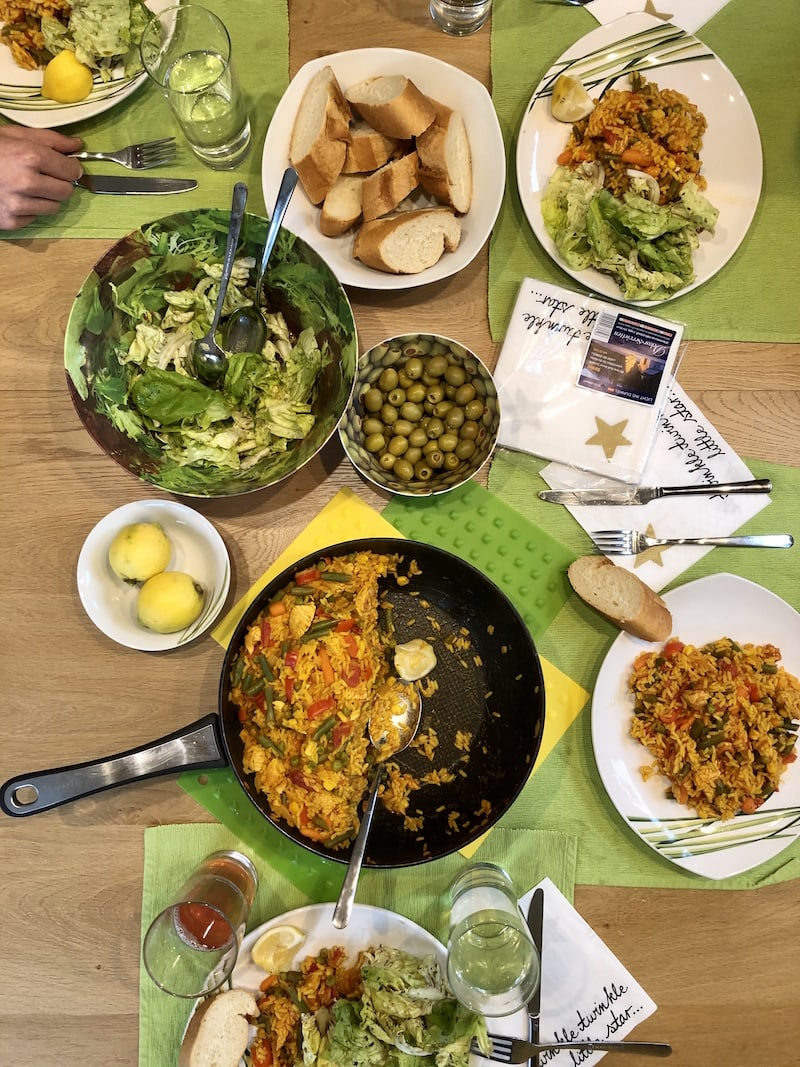 … turns out we did a rather nice meal to be presented on TV, don’t you think!

“Heiraten während der Corona-Pandemie: Geht das?” (“Getting married during the Corona pandemic: (How) Does it work?”, broadcast on Sunday, 19 April 2020 in “Aktuell in Österreich Spezial”, ORF Channel 1)

My most recent television feature had a more peculiar topic as its subject: Could my husband Georg and I have our planned wedding celebration later in the summer of 2020? TV producer Sarah Rogaunig interviewed not only wedding couples, but also confirmands and parents of baptized children. Once again, national TV came home to us. This time, all filming took place in the garden, which had already turned green due to the spring.

(PS: Although we were still uncertain at the time of the interview as to whether our wedding celebration planned for 8 August 2020 could indeed take place, I can now inform you that we were allowed our party with almost 50 people without any major restrictions. Here is my blog post about getting married at Weissensee Lake: A journey of a kind.). 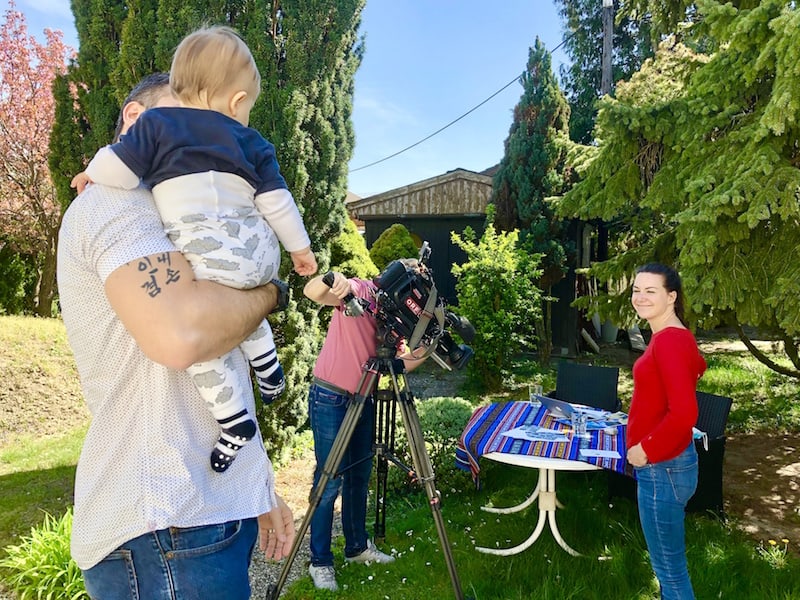 At only one year old, baby Liam has been in front of the camera three times already: He’s eager to know just how a garden TV studio could look like … 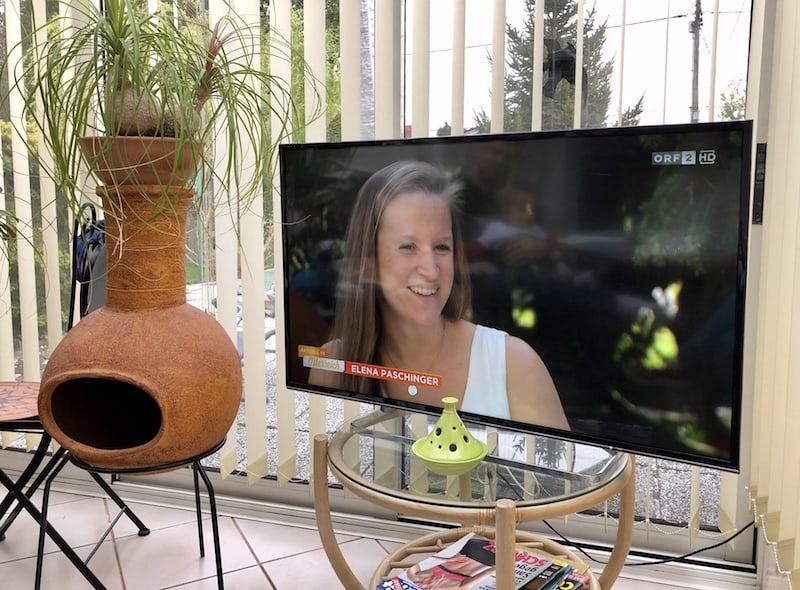 … loved watching the interview a little while later on national TV.

I am indeed curious as to who else will knock on our door next? 🙂

Of course, it is without saying that I am available for any kind of other features and interviews, TV or else. Check out this page to learn even more about me. 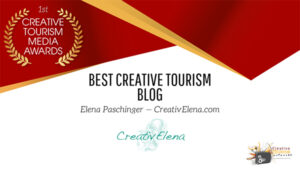