Photo Festival #LaGacilly in Baden near Vienna: “Due North” in 2022.

Five years of #LaGacillyBaden : Once again, Europe’s largest photo festival, heralding from the small French town of La Gacilly in Bretagne, is held in Baden near Vienna. And once again, it’s an open air festival, completely free of admission fees! No wonder thus, that travelling to Baden from the nearby capital city Vienna is high on our list of family activities for the summer.

The 35 or so photographers, who take part in the festival, together exhibit more than 1500 photographs, all of them nothing short of world class. With their powerful images, many of which have won prestigious awards, they encourage us to think: About nature, about humanity, about the state of the world today and in the future, and also about the way we treat our planet Earth.

Are you ready for critical debates? Let’s go to Baden: Until the middle of October still, you can admire the photographs in the city and parks of Baden near Vienna. Some of them even cover entire façades at almost 300 square metres tall! 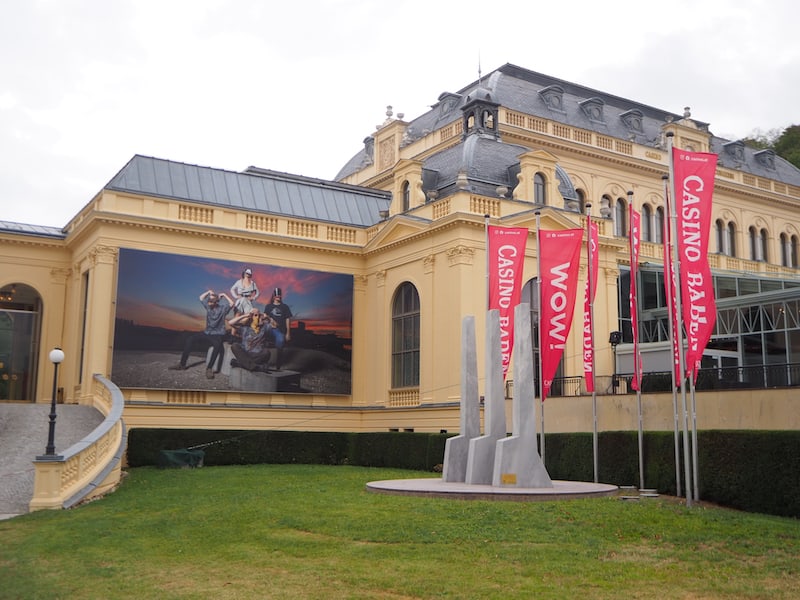 Highlighting contrasts: Photographs of the festival exhibited at the Casino Congress Centre in Baden near Vienna. 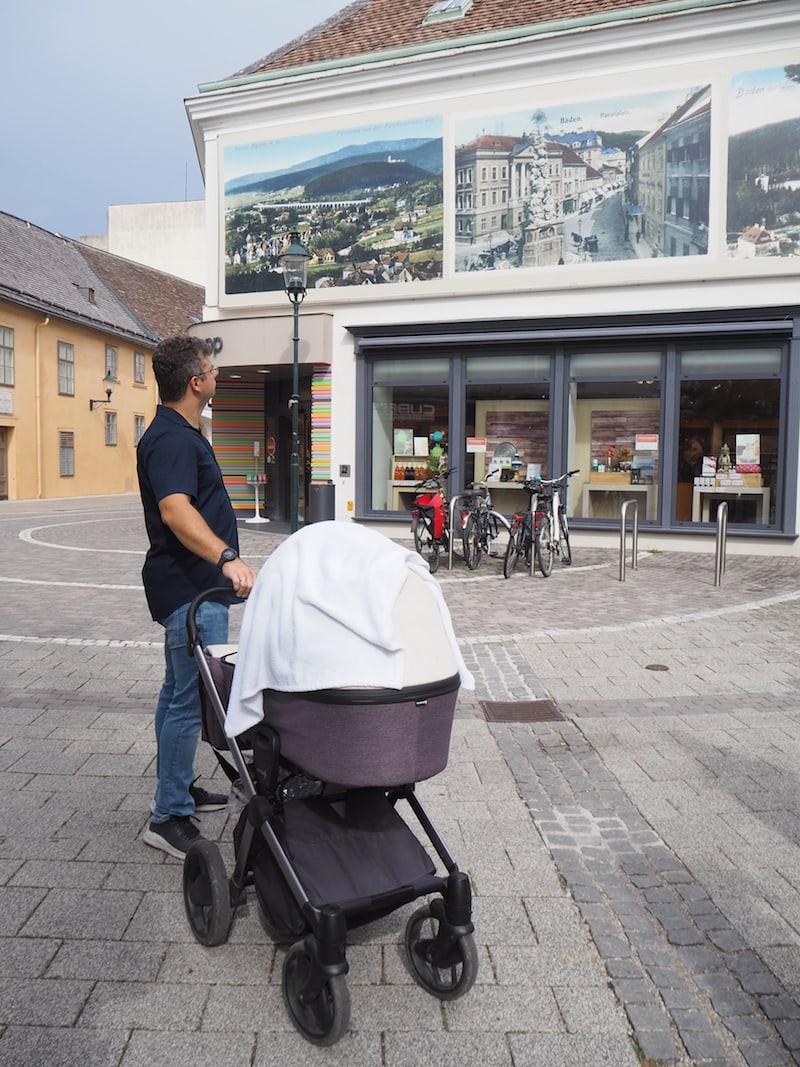 In addition to top international photographs, there are also local art pieces to admire: Old postcard images from the city of Baden, for example.

“Due North” in #LaGacillyBaden : A documentary series about climate change.

So what is the theme of this year’s exhibition, “Due North“, all about? Having been invited to this year’s media event “Long Night of Photography“, we find ourselves engaged in stimulating debates: Climate change is real, and visible all the more so in the northern regions of our planet. All throughout the festival, countless photographs show the fragile beauty of the North, pointing us towards uncomfortable questions such as “Do we really want to carry on like this?”, yet also giving hope through unique perspectives on issues such as nature and species conservation, social engagement, etc.

The panel discussion during the “Long Night of Photography” held many interesting thoughts about this. I was also lucky to meet festival director Auguste Coudray from the Festival Photo La Gacilly in France. Next year in June, he tells me, La Gacilly will celebrate its 20th anniversary. Wanderlust is stirring, and I’m thinking that perhaps another trip to France is due soon … 😉 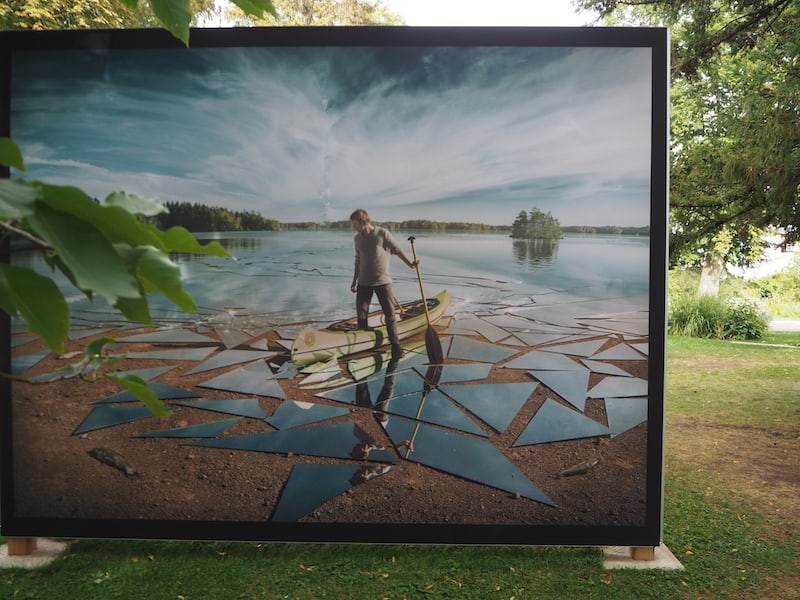 Impressive: The images by Swedish photographer Erik Johansson are thought-provoking in a surreal way. 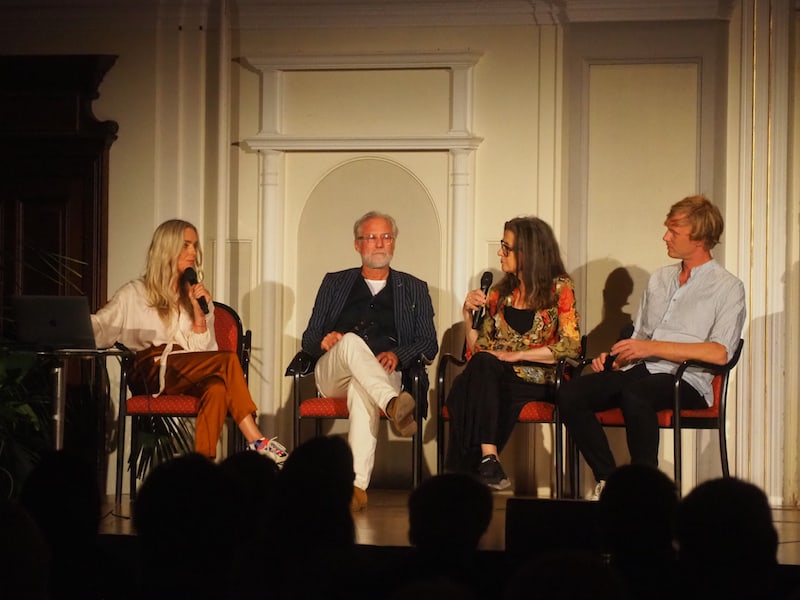 Spot the young photographer seated on the far right during the panel discussion at the Long Night of Photography. 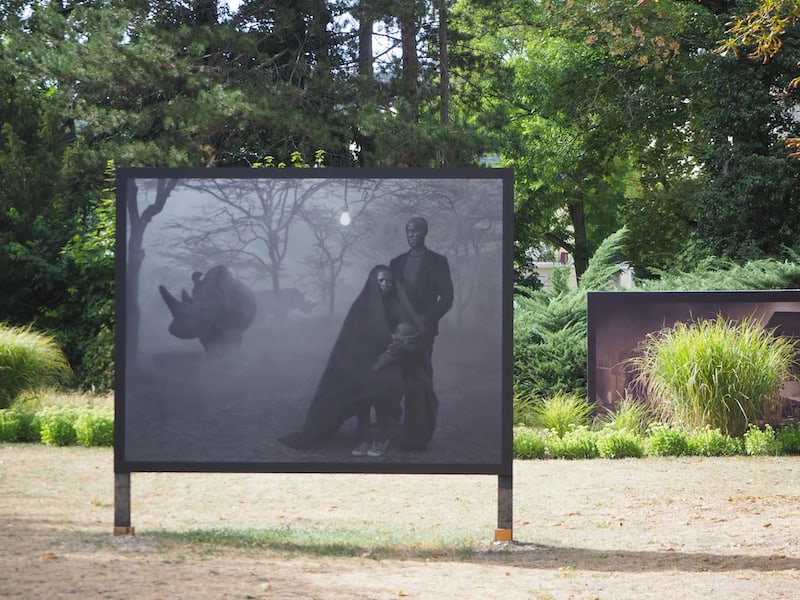 I was also very moved by the photographs of the English photographer Nick Brandt. His (mostly black and white) discussions stir around the issue: Is there (not) enough living space for everyone? 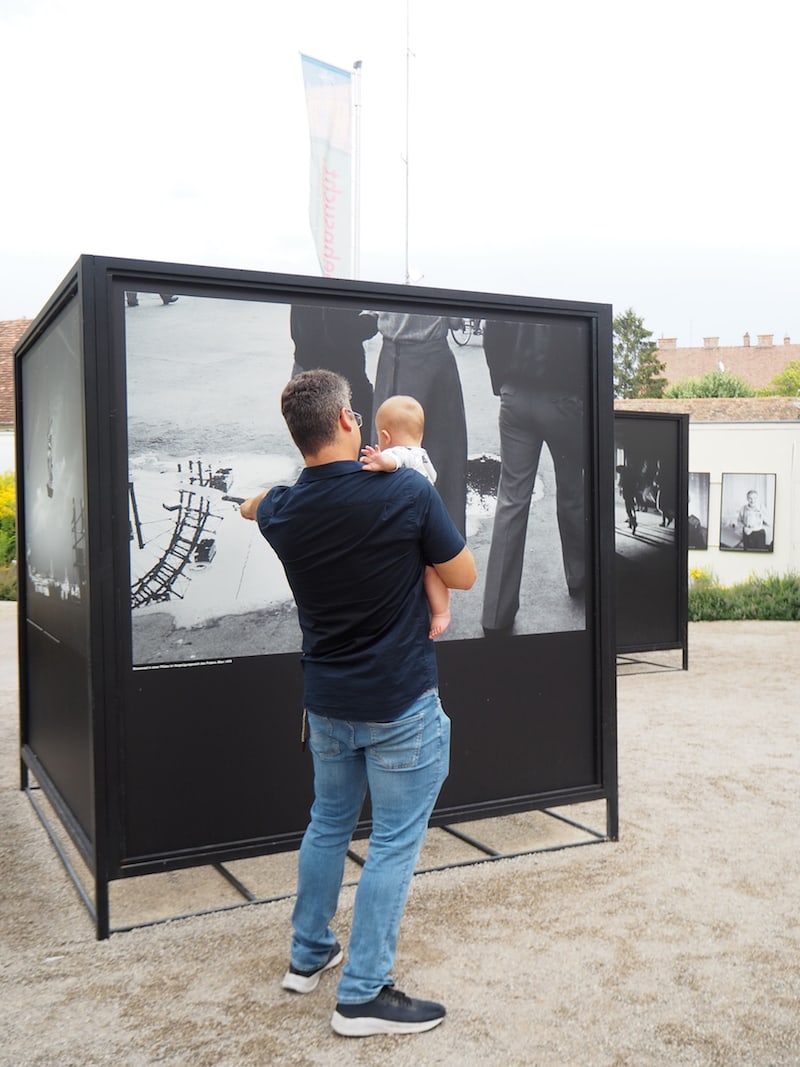 The festival also calls on early female talents in photography, such as Christine de Grancy from Austria, for example with this picture from the Vienna Prater in 1979. 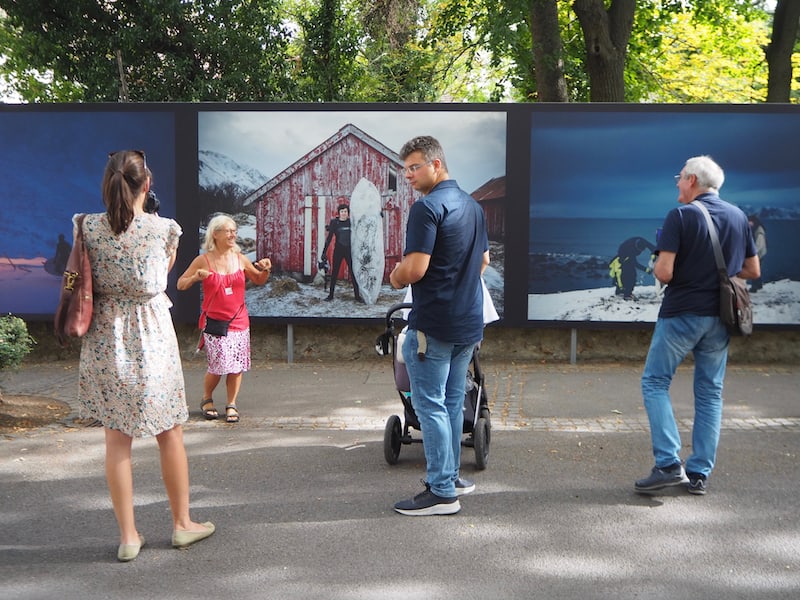 Like already mentioned, I can only recommend booking a guided festival tour … 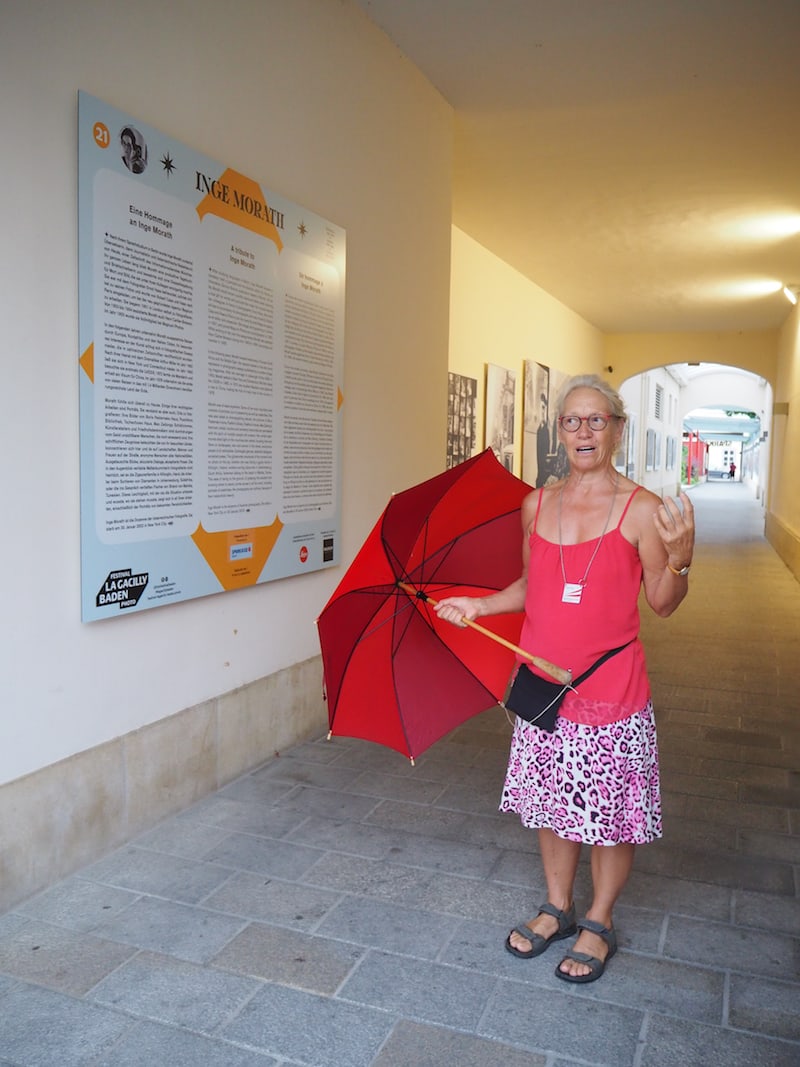 … such as with charming local Austria Guide Renate Ryba … 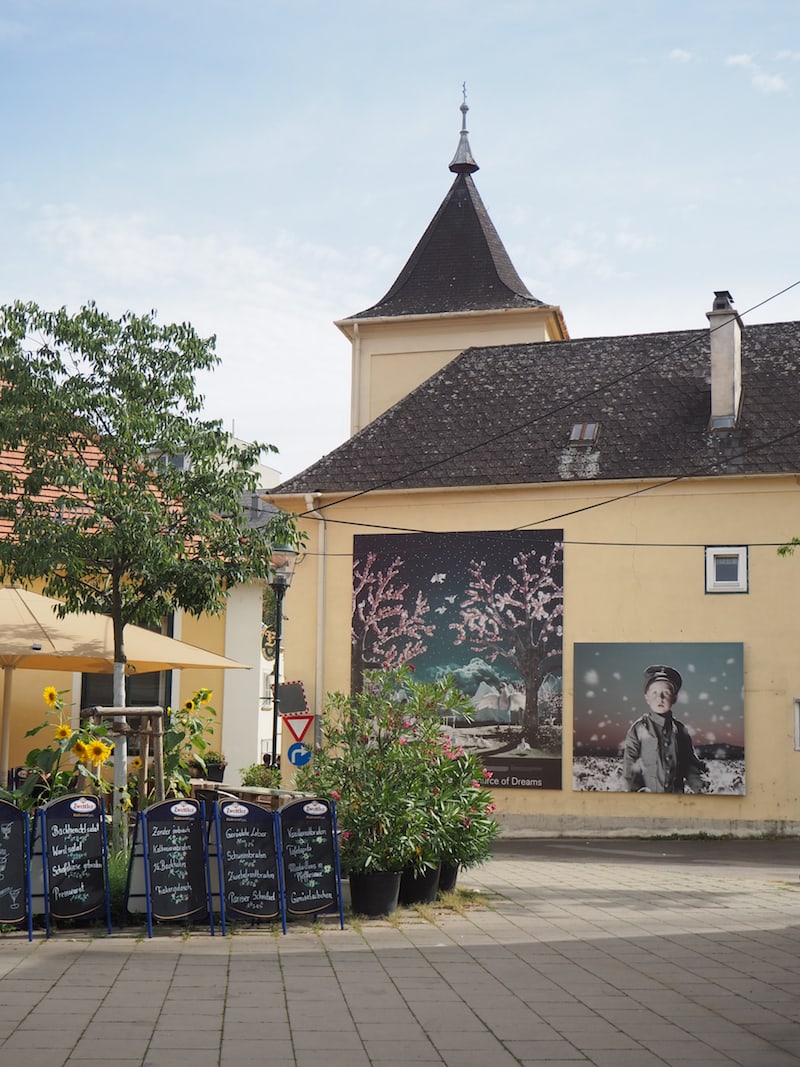 … as no matter where you look in Baden … 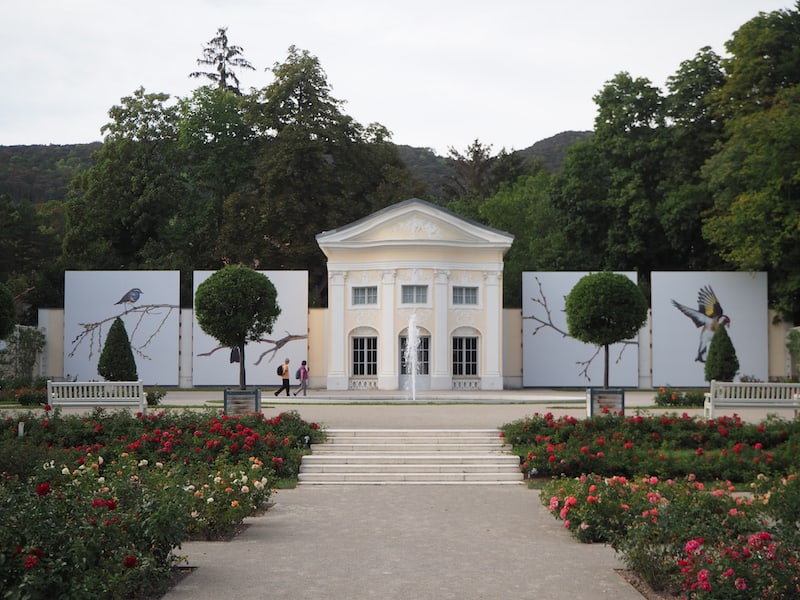 … the city and its beautiful parks are full of mesmerising, small- and large-scale photography. 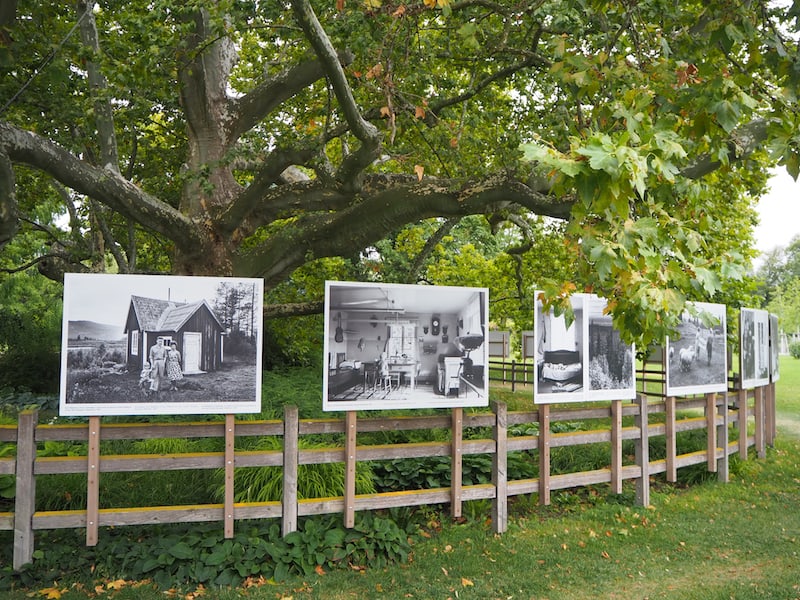 Worth seeing: The old plane tree with the exhibition of Swedish homeland photography as part of this year’s festival “Due North”. 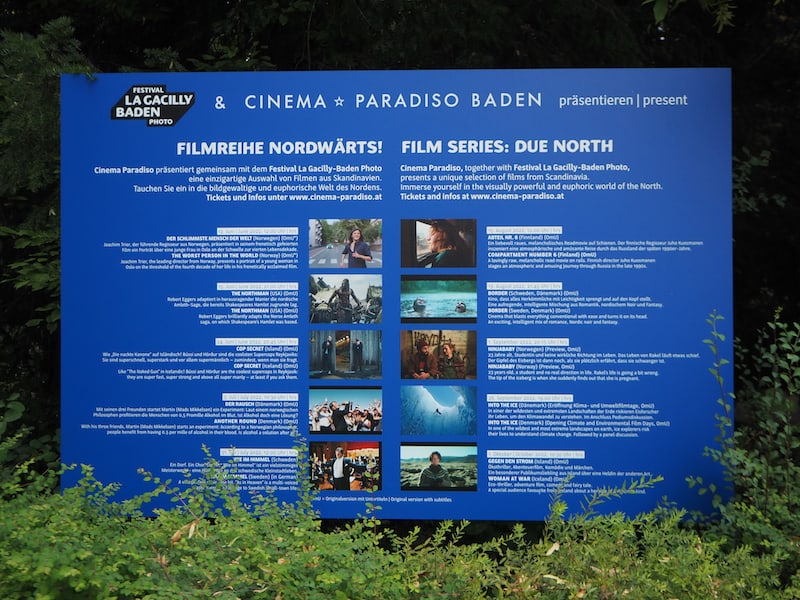 The local Cinema Paradiso Baden also runs its own film series “Due North” as part of this year’s photo festival!

Calling all foodies: Tips for eating out in and near the city of Baden.

Let’s be honest: A visit to La Gacilly Baden Photo makes you hungry (and thirsty)! I can recommend having lunch at Gasthaus Krenmayer, where we had lunch this year. It is located right in the old town of Baden, and close to the famous historic promenade.

A little further away, in the middle of Baden’s greenery, the Doblhoff Park Cafe welcomes you. In summer, the homemade apricot dumplings and grilled fish are a dream!

Even further away, you can savour some of the region’s typical desserts with the Klosterschnitte at the Klostergasthof restaurant Heiligenkreuz! Below are a few photos that will make your mouth water…! 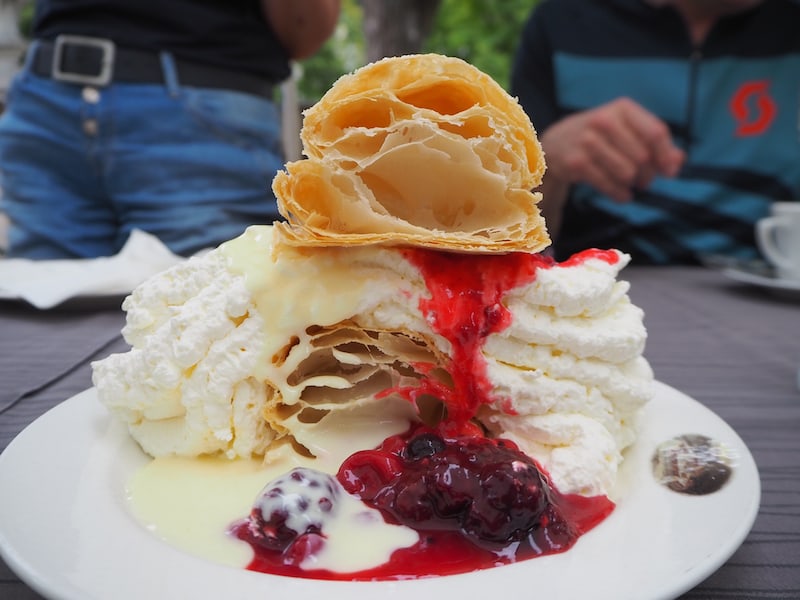 The Klosterschnitte: A famous dessert at the Klostergasthof restaurant in Heiligenkreuz. 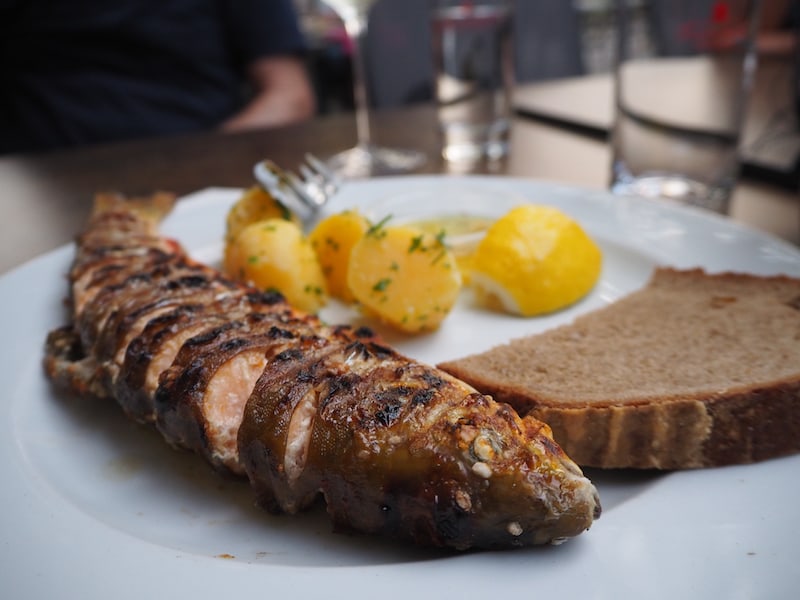 In the evening, we enjoy fresh grilled fish at the Doblhoff Park Café as part of the Long Night of Photography media event. 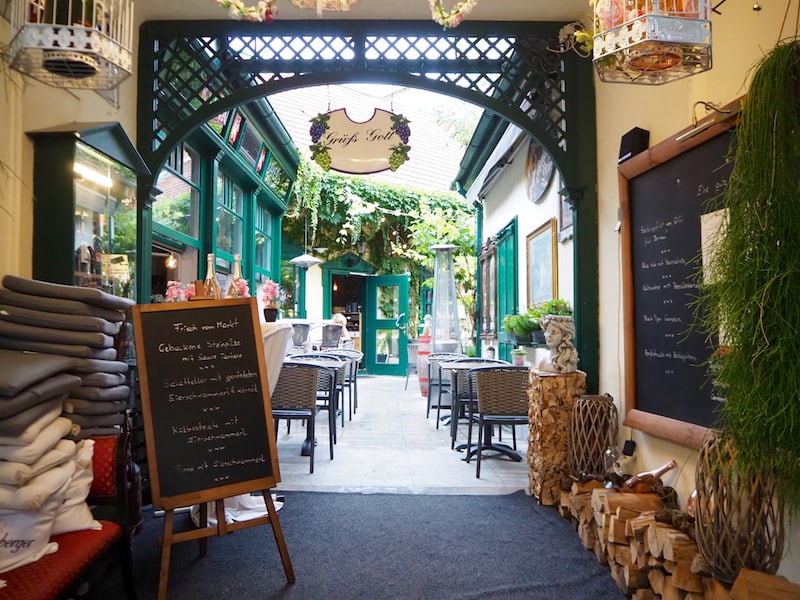 Restaurant Krenmayer for lunch in the old town of Baden … 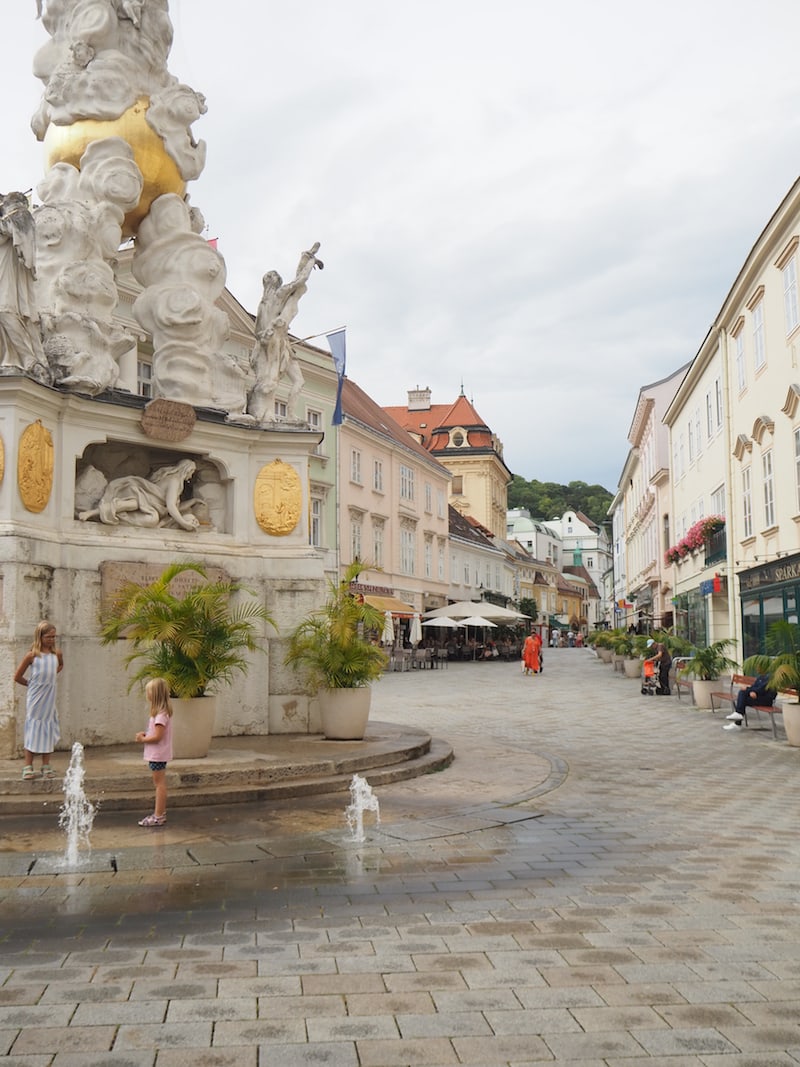 … right besides the main pedestrian area.

If you have even more time to spare, fancy taking an e-bike through the Helenental valley.

From our experience of exploring Baden and the nearby surroundings, I can recommend renting an e-bike to cycle through the Helenental valley to Heiligenkreuz Abbey, about 15 kilometres away, and back.

The green valley marked by the river Schwechat is partly under nature protection and offers idyllic cycling and hiking paths. It was already popular with the emperor’s family and numerous other illustrious personalities, fleeing from the summer heat in Vienna. Among other things, you will find the Beethoven Stone along the way, which testifies to his presence in Baden and the Helenental.

I can also highly recommend the Beethoven House in Baden from previous visits. But first follow me into the green … 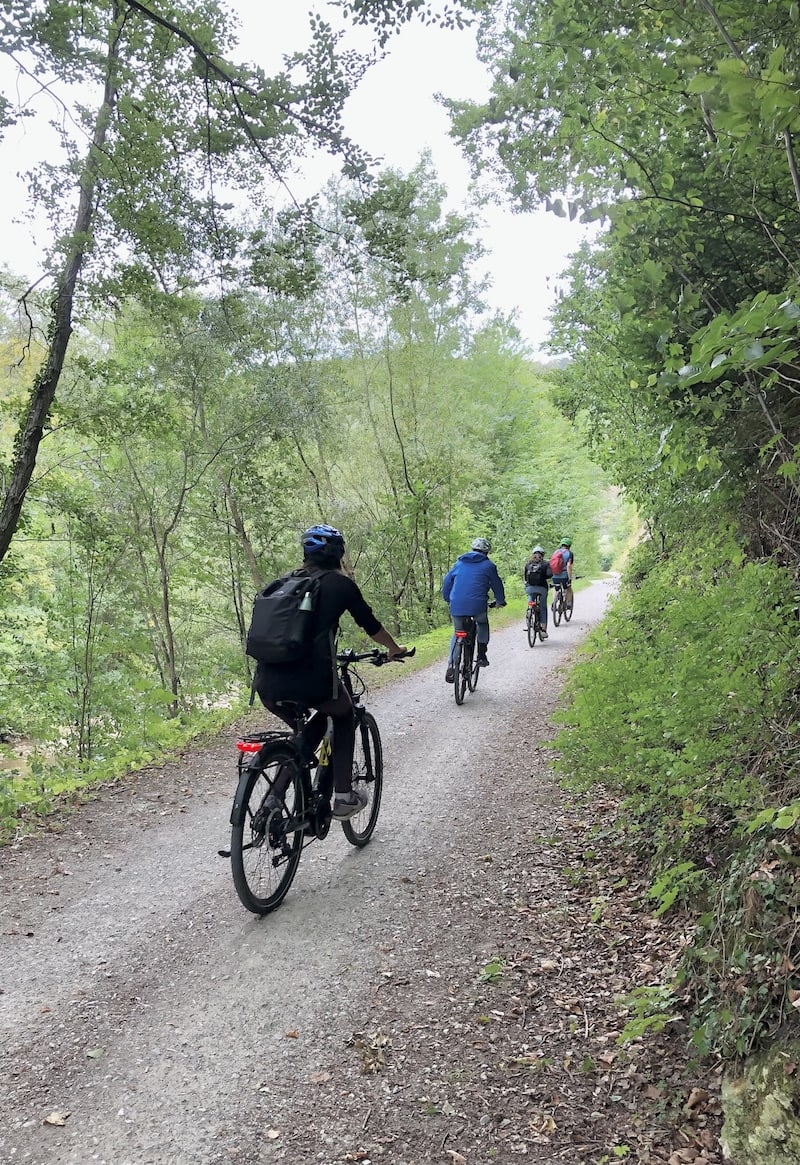 Taking our e-bikes through the Helenental valley …

… including many attractive spots for breaks and short walks … 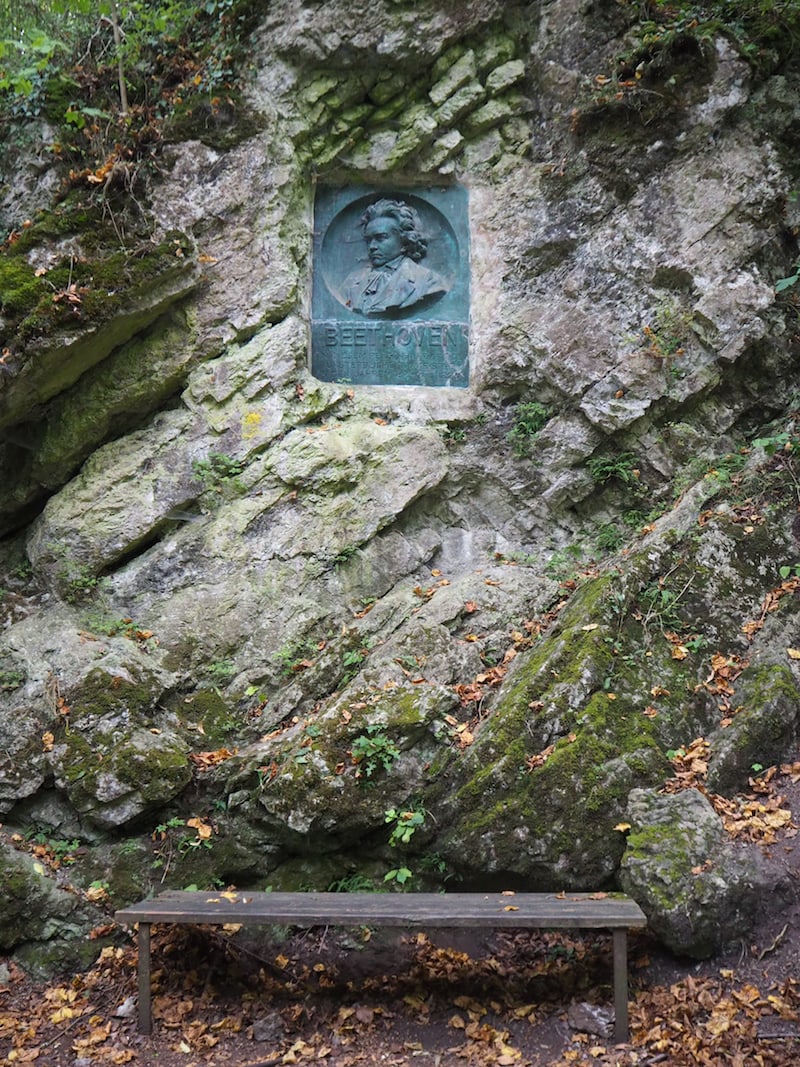 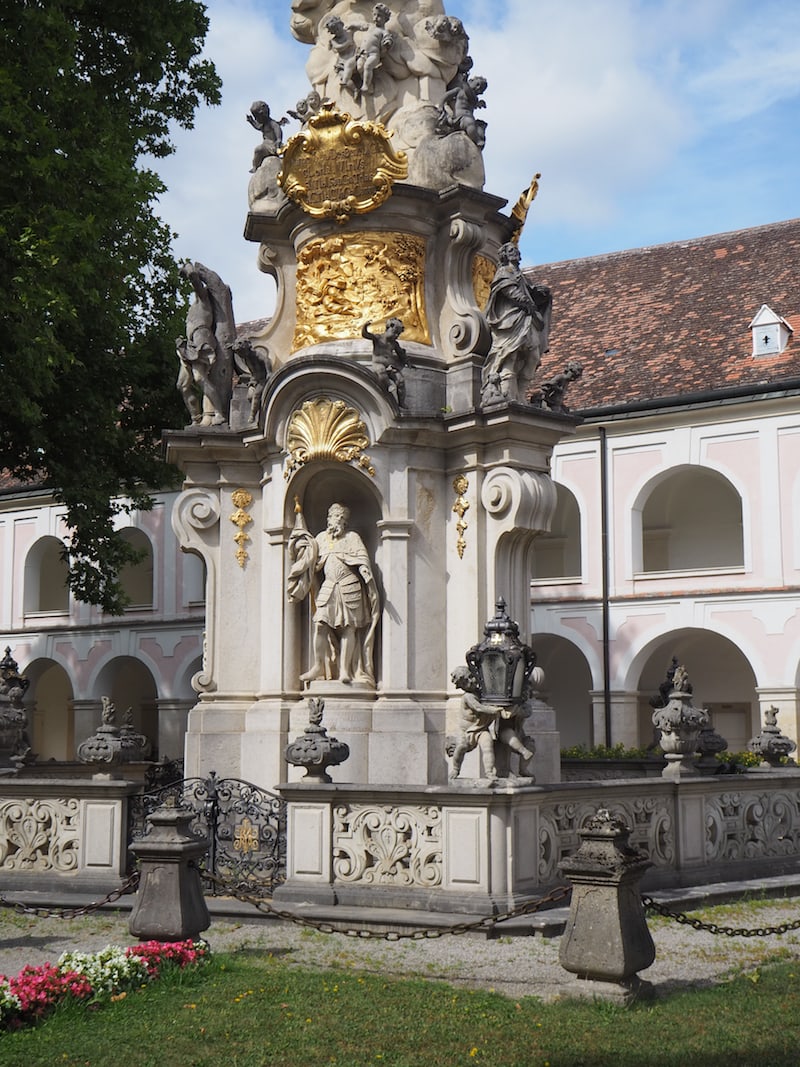 … all the way to Heiligenkreuz Abbey … 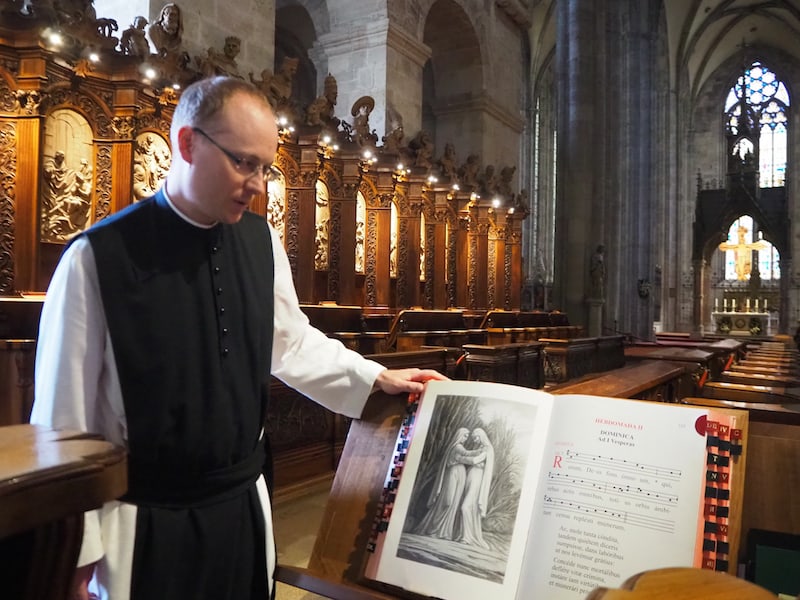 … where we are met by Father Guerricus Karl, a local monk taking us through the abbey and its collegiate church … 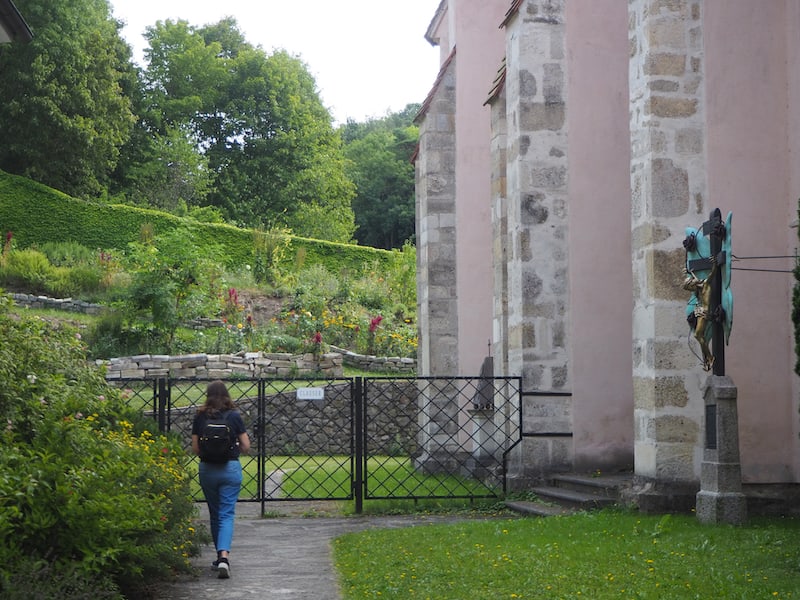 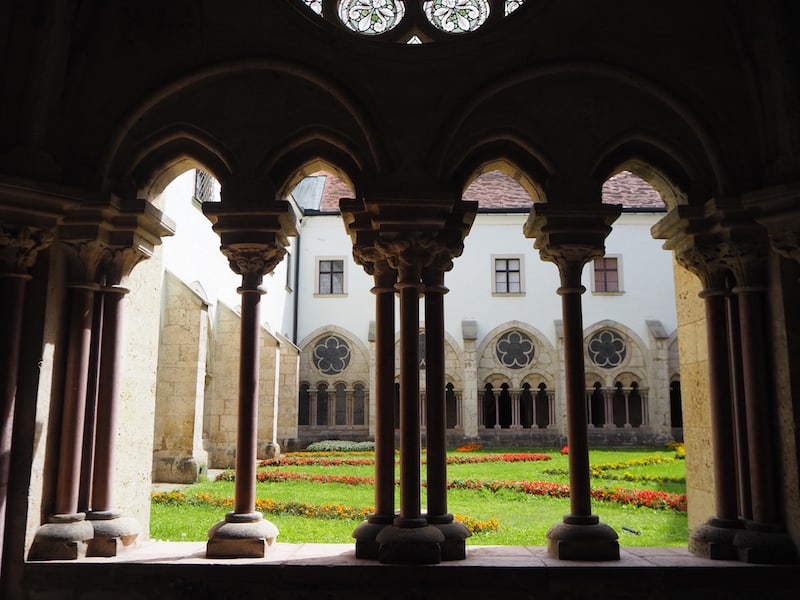 … I love walking through the cloister … 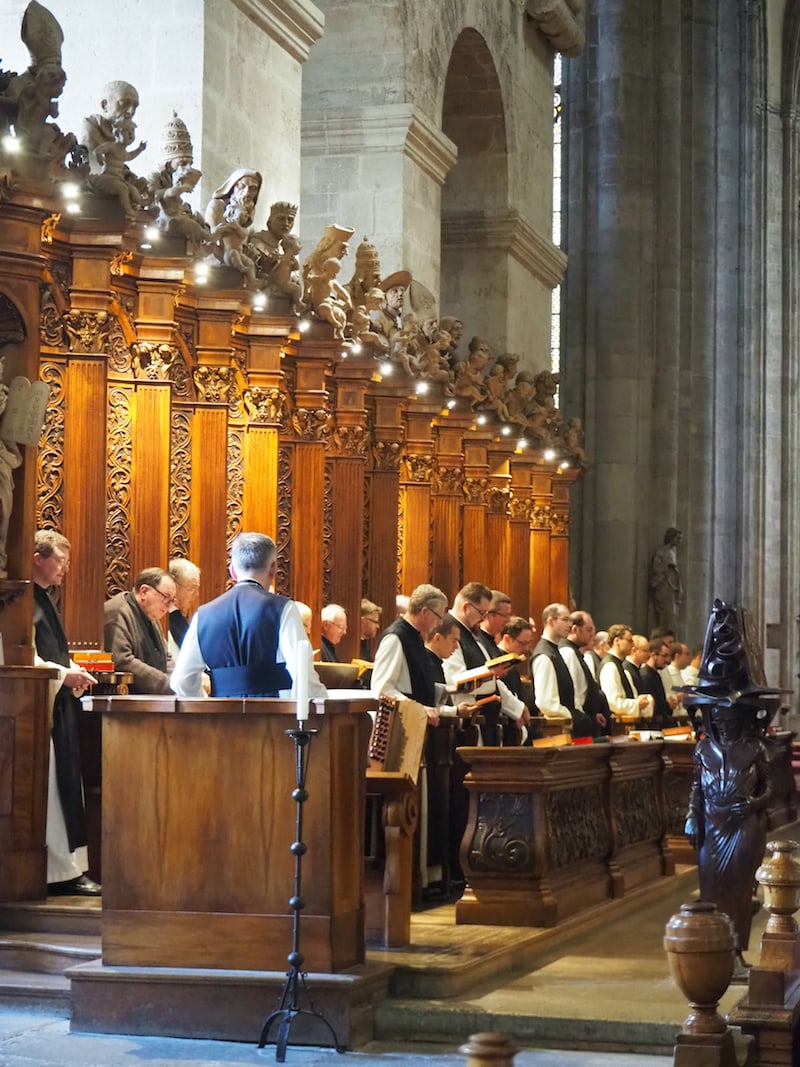 … if interested, you can read even more about my (overnight) stay at Heiligenkreuz Abbey here. 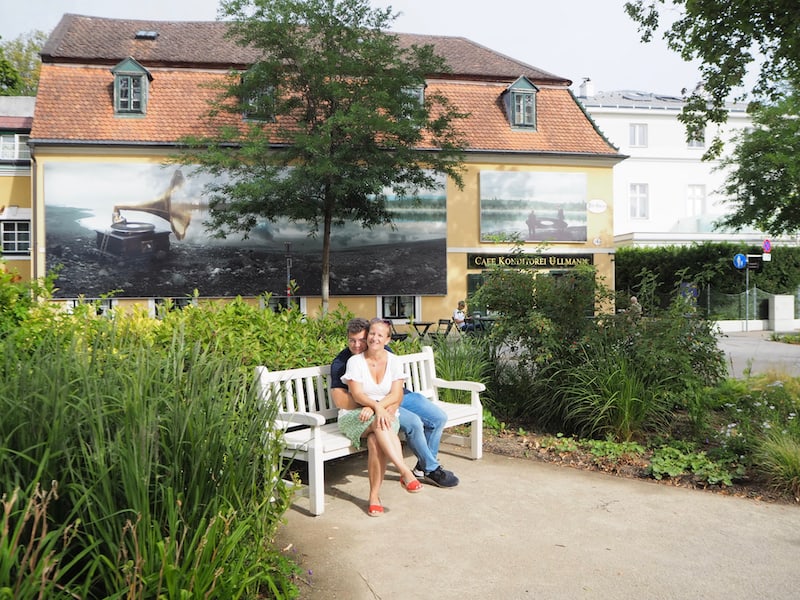 And you? When is your next trip to Baden?

Our Glamping Trip to the AlpenCamp in Carinthia