ITB Berlin. Somehow, each and every year, it creeps up on you slowly, until it hits you again almost by surprise. For the ninth time this year, and ever since I’ve attended the world’s largest travel trade show, ITB Berlin, as a tourism student (and now a fully fledged, professional travel blogger), it has exuded a certain kind of magic for me.

ITB Berlin: Easily the “craziest” 72 hours of the year …

… meaning “our trade visitor days” that take place from Wednesday to Friday in the first week of March. A time where 120.00 trade visitors from all over the world (that’s 186! countries) come together to network, party, and exchange ideas, turning the ITB travel trade show into the single largest travel event the world has ever seen.

I am really proud of our integral part in this important gathering, not only with regards to our standing as “professional travel influencers”, but also with our real impact on travel decision making increasing steadily each year. Again in 2017, we have come together to address professional standards and best-practice-examples of how to cooperate – and to celebrate yet another large-scale, global family reunion.

Countless industry talks at ITB Berlin are now being led by talented influencers & travel experts from around the world; Traveldudes & iambassador, the world’s leading collective of professional influencers, have again secured their own booth as part of the so-called “eTravel World”. 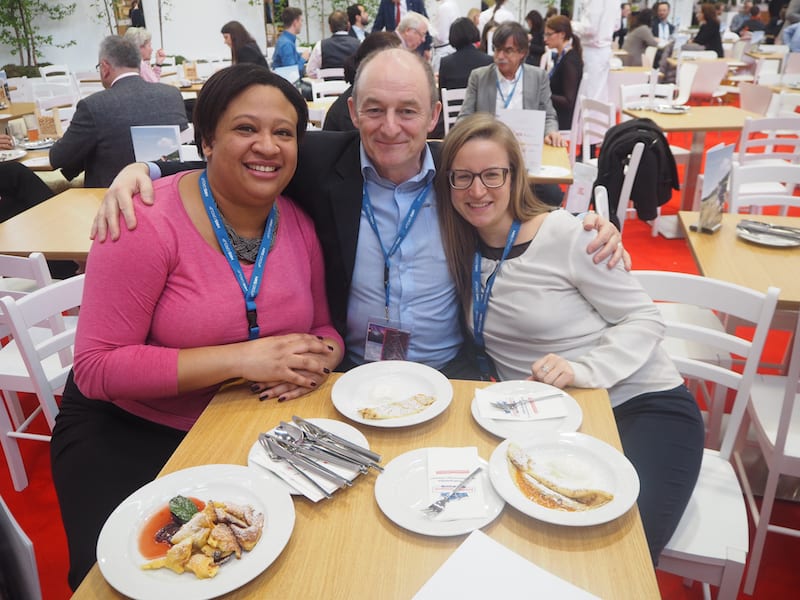 Fun Facts First : “Family meet-up” with my dearest friends from the UK; talented travel writers & content producers Terry & Sarah Lee, of LiveShareTravel.com. They are by far the single greatest promoters of my own home country, Austria, to the English-speaking market: Read more about their recommendations for your next trip to Austria here. 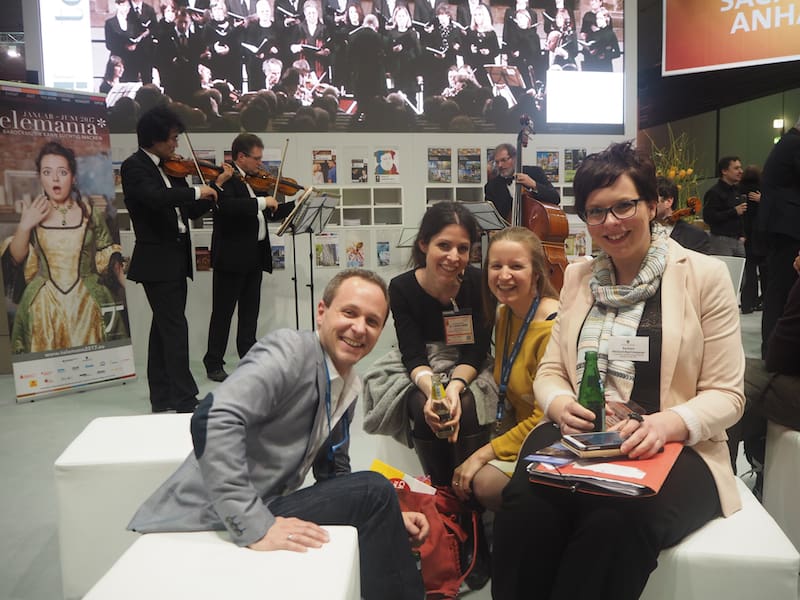 Just as wonderful: Familiar faces, this time with friends from university in Austria who now work in Germany … 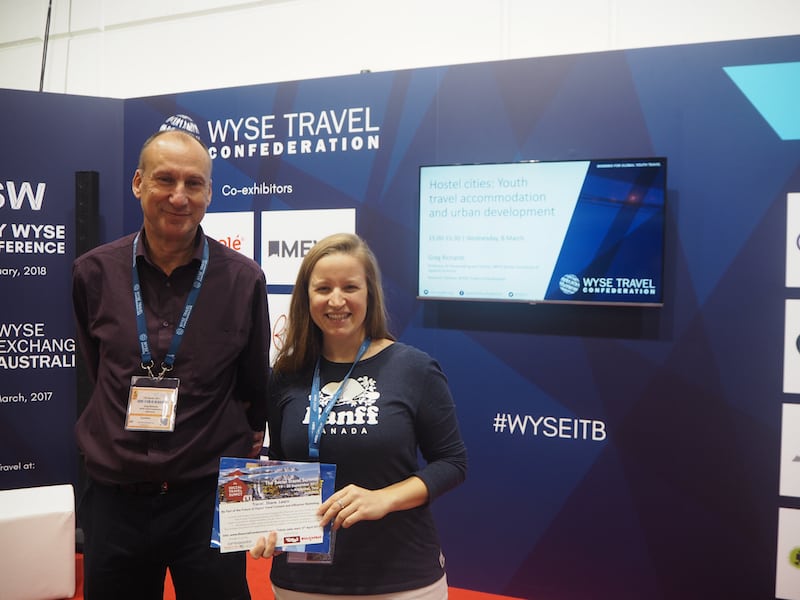 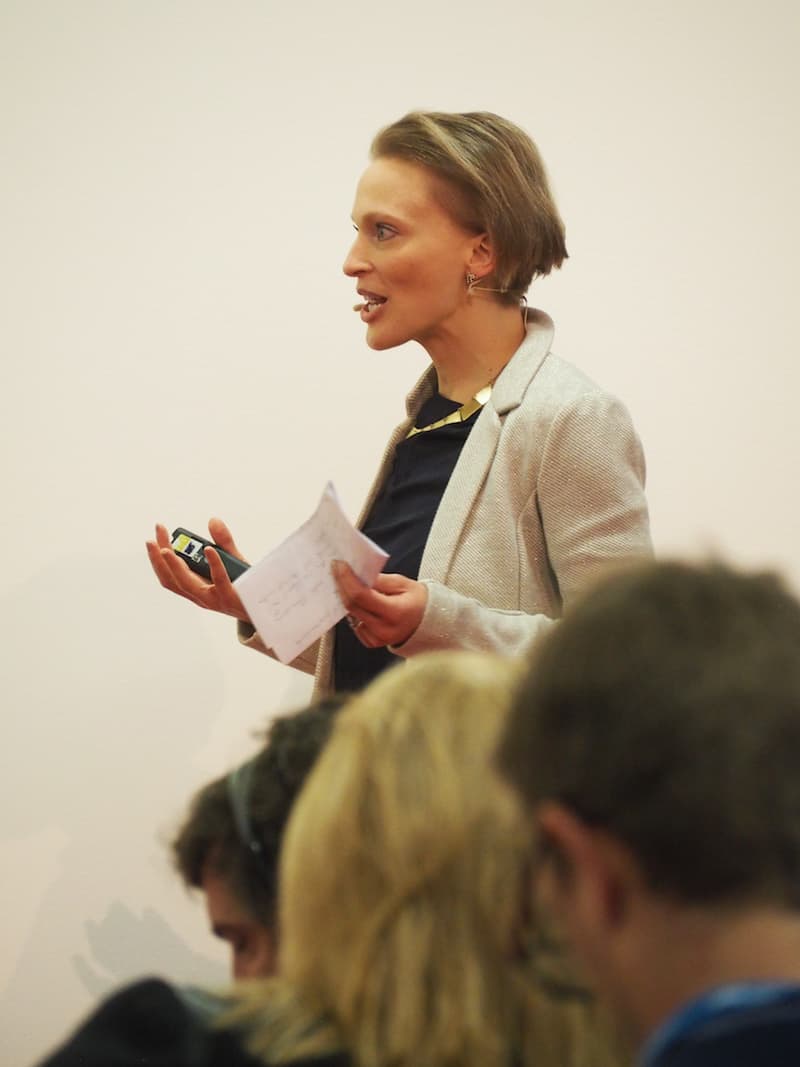 … listening to Catharina Fischer, of the German research institute “Tourismuszukunft”, deliver her inspiring talk on “How to reach Millenials” … 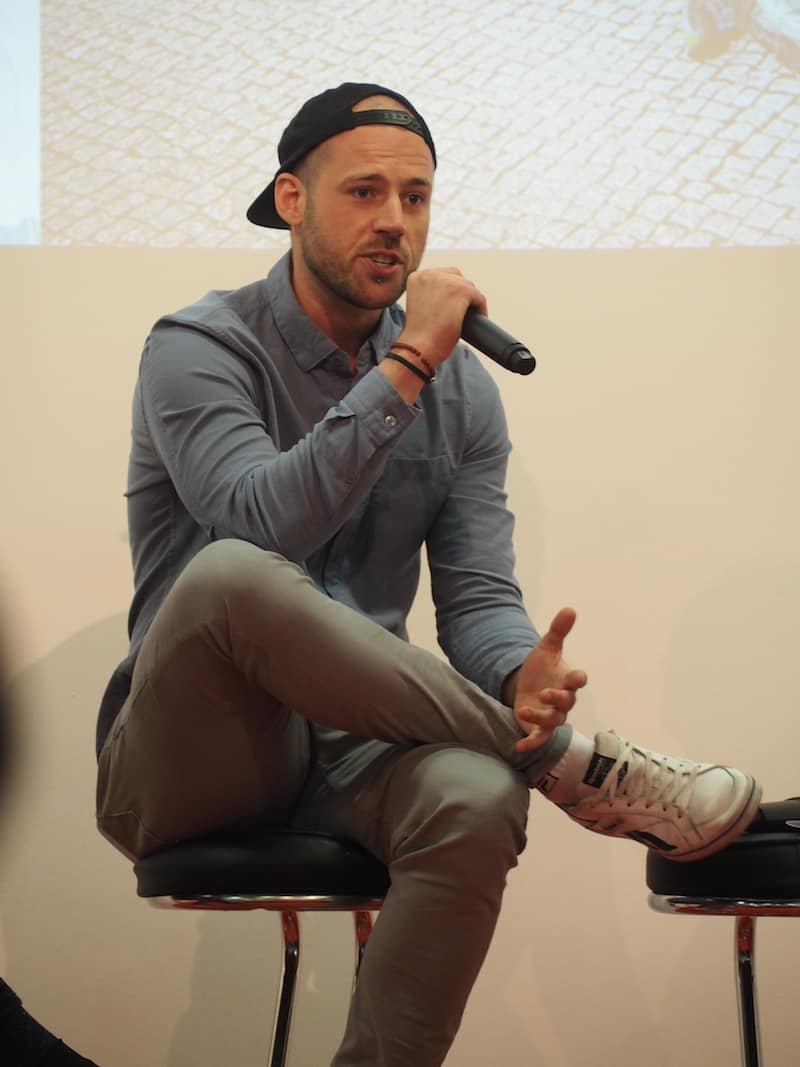 … followed by an interview with the cool Canadian Mike Corey, famous for his inspiring travel video productions (“YouTube videos with a duration of 10 or 15 minutes are back in popular demand”, he says) … 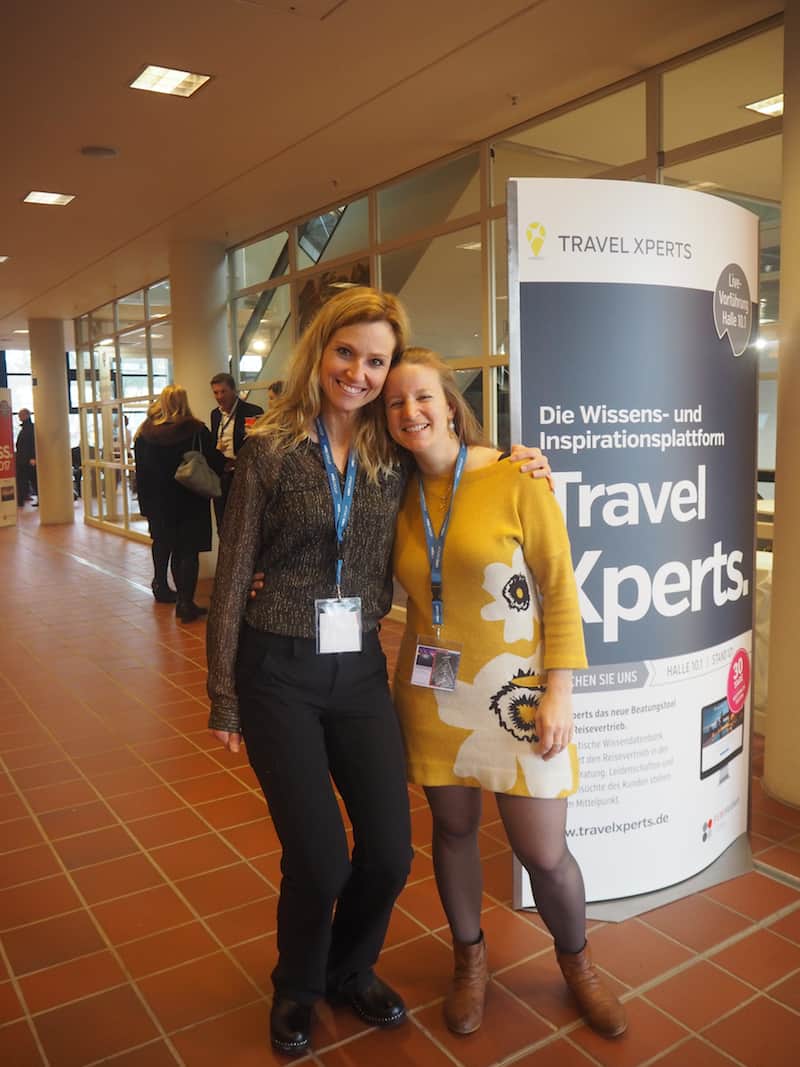 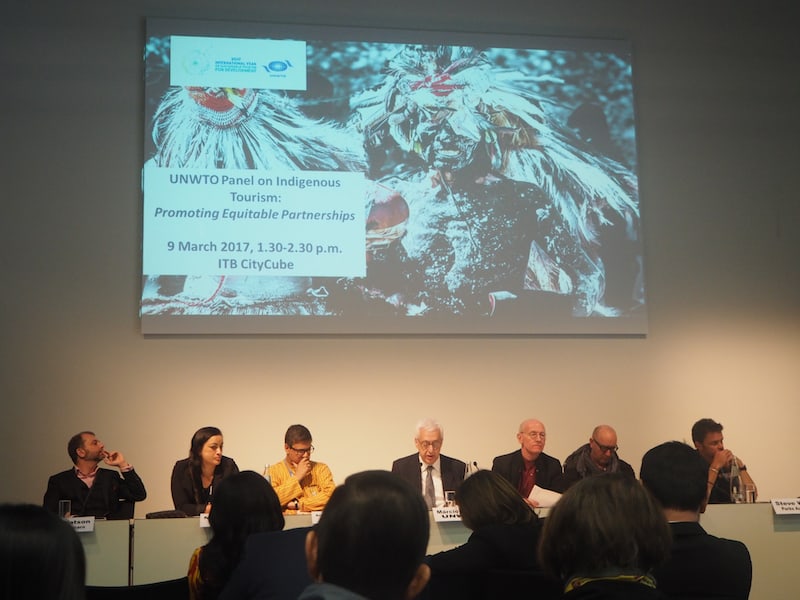 … and who says you can’t have “many families” after all? Here is one more, taking inspiration from meeting with my team at the UNWTO United Nations World Tourism Organization’s panel on Indigenous Tourism this year (aw, the travel bug bit me hard!) … 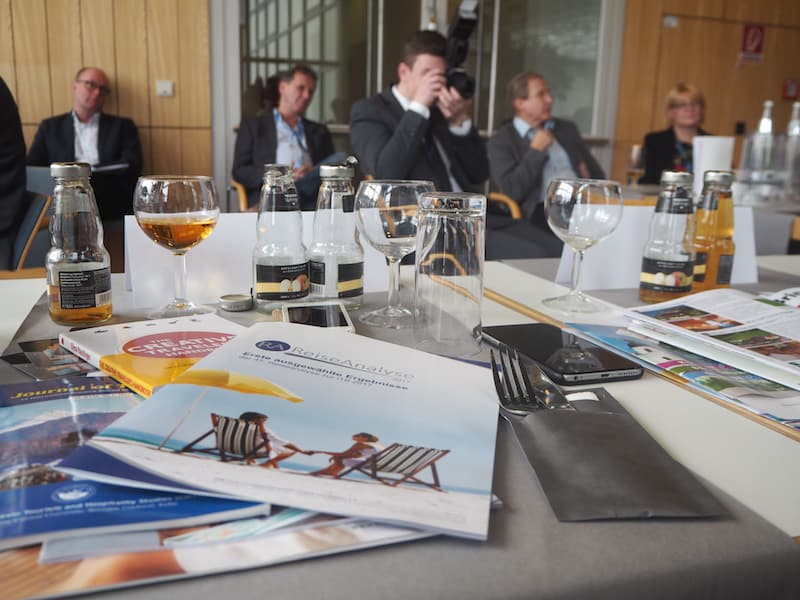 … presenting about our own networks, Creative Tourism Austria, shortly after … 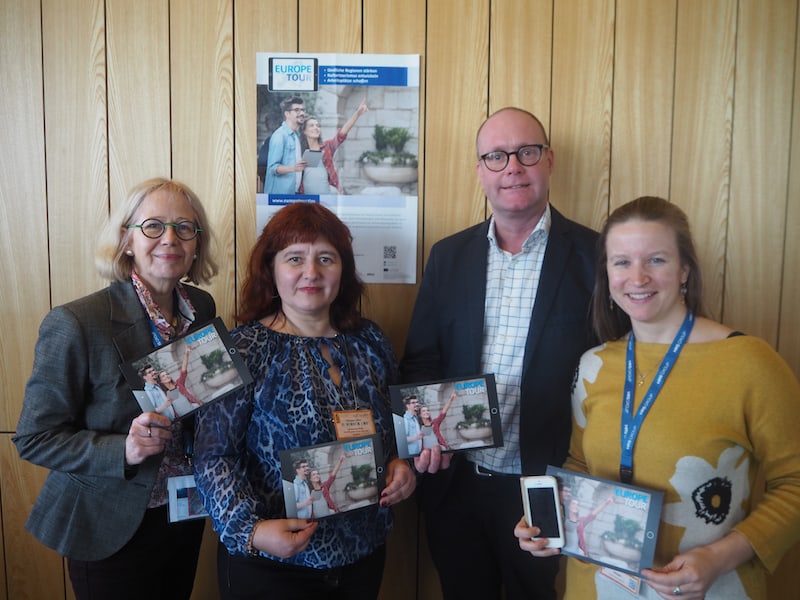 … as well as together with the EUROPETOUR family: Thank you for such a successful, shared press conference, dear Karin, dear Lacra, dear Stefan (from left to right). 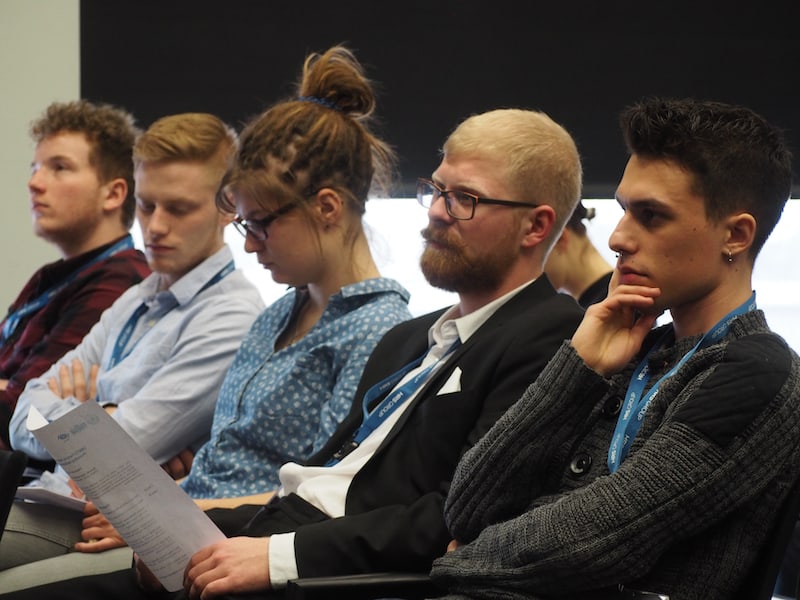 I just love to watch and capture the focus of all the dedicated people listening to our industry talks around me, having travelled to attend ITB Berlin from all over the world … 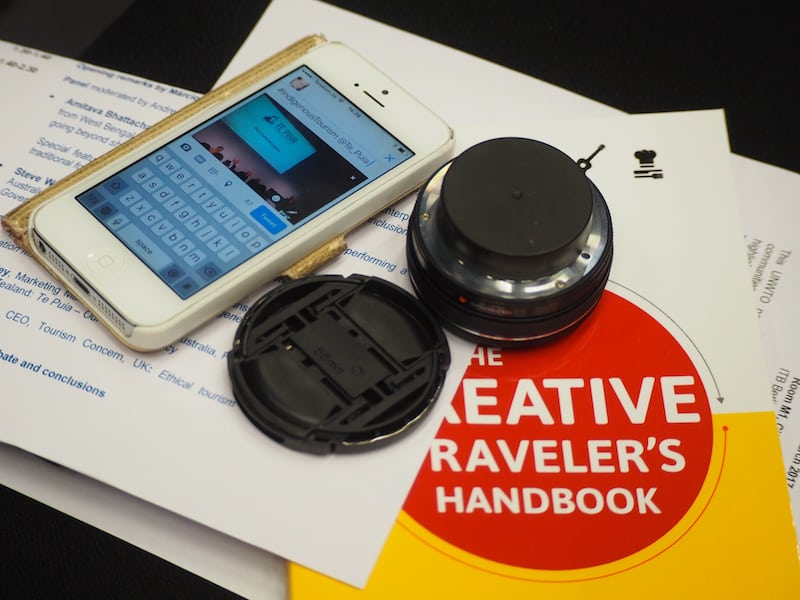 … including listening to what we, as global influencers, have to say: Live tweets from my UNWTO panel session on Indigenous Tourism.

Another highlight (as if all of the above weren’t enough): Austria announces Facebook Live interviews, highlighting the professional work done by leading travel influencers worldwide.

“So … this thing with Facebook Live, Elena. We will not tell you the exact questions beforehand. It’s really live, ‘as it is’, addressing questions about your own, unique point of view as a travel blogger, speaker, consultant, and influencer … It is most interesting for us, and our audiences tuning in right now, what you have to say. Ready? OK, we’re live in four, three, two …”

Exciting, to be sitting on a “forest stage” with the Austrian National Tourist Board as part of their Facebook Live vlogging reports from ITB Berlin 2017! Sorry guys, if the interview is only in German: Head over here for a full summary of events (including the exciting announcement that this year’s Social Travel Summit will be coming to Austria … Yay !!!).

From Austria to Canada .. For sure, eh.

Canada is a travel bug whose bite I just love. And would you believe it: The magic of this country has caused me to publish almost 50 travel articles, thousands of photographs, and a dozen videos in both English & German languages from “just” three months on the road there! After all, what can you say about a country that’s got some of the Earth’s most spectacular natural landscapes, great work ethics, and lots and lots of the friendliest, sweetest, and smartest people in the whole wide world?

Well. I know. You may be able to say similar things about my own home country, Austria. Or New Zealand. But Canada .. It has simply grown on me. And I will say it, again: “12.000 kilometres for a birthday cake” …! 😀

So it comes as no surprise that I’ve spent almost the entire first half of ITB Berlin in & around Canada. Enjoyed an interview with the “Calgary Stampede Indian Princess”, gathered countless other travel tips for exploring even more of this beautiful country, feeling home with “my Canadians” in Berlin. Must be the magic of Canada, really. And let’s be honest: Have you ever met anyone with a negative opinion on Canada??

See. Check this out. 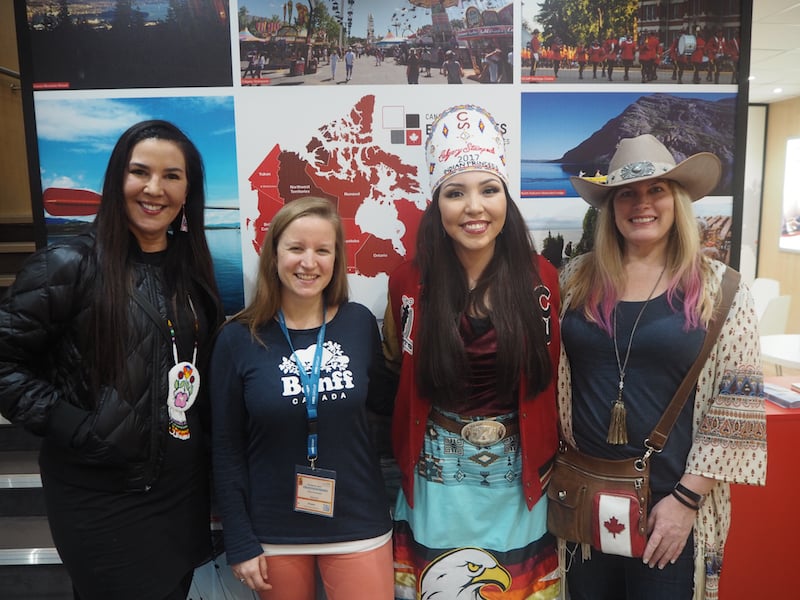 Happy with my new-found friends from Canada in Berlin: Holly Fortier, Savanna the “Calgary Stampede Indian Princess”, as well as Lindsay Jardine from Alberta in Western Canada. 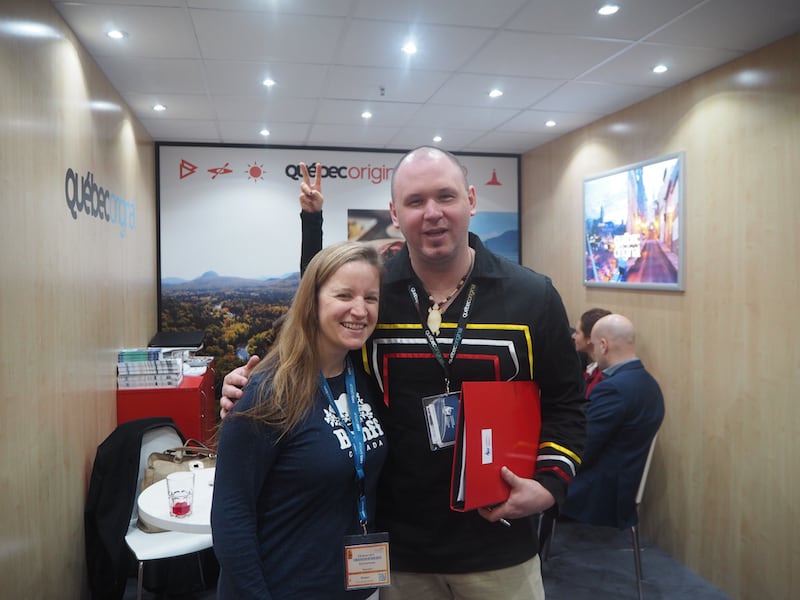 From west to east, meeting Sébastien Desnoyers of “Aboriginal Tourism Québec”: “We really need to be doing something together this year, dear Elena ..!”

Check out their beautiful video about the power of Aboriginal tourism in Québec: 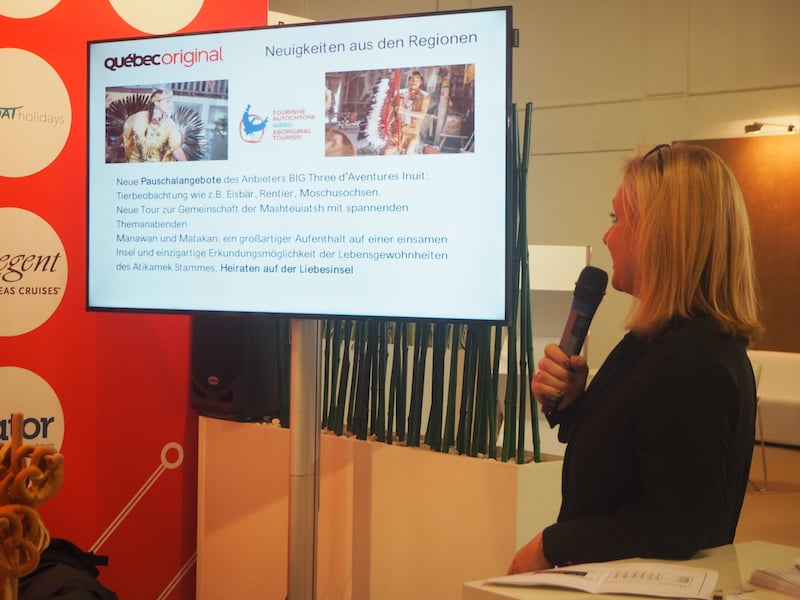 … and really, Québec is calling me, introducing us to lots of different offers again this year at ITB Berlin. 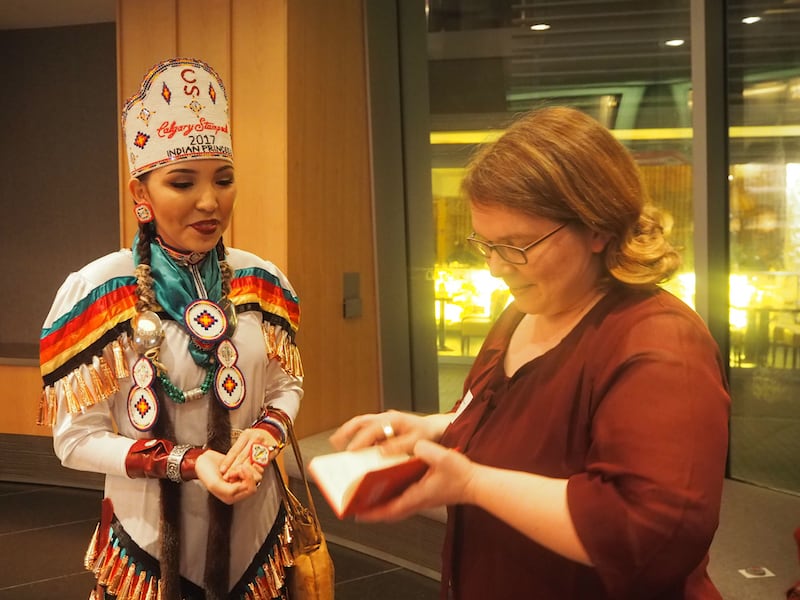 My friend Janett, too, has had an opportunity to run an interview with the beautiful “Indian Princess”, at the Embassy of Canada in Berlin … 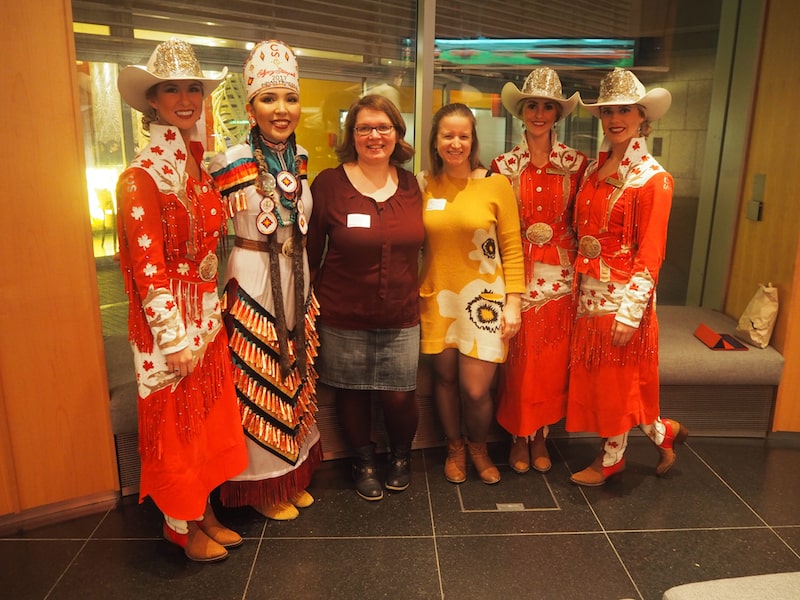 … and here we are, sharing a moment full of warmth and happy memories: Out & about during the ITB After-Party at the Canadian Embassy with our “Calgary-Girls”!

Canada, I’ll be back. It’s official. “Elena, just let us know when you would like to be back in Canada, and for how long, and we will book the flights for you .. I can see you’ve already made some great connections, haven’t you?” That’s Barbara Ackermann, who together with her team at “The Destination Office” coordinates all German media activities for Destination Canada.

We really appreciate your work, is the silent message in this wonderful announcement. It really honours and moves me. And visiting ITB’s “Destination Canada Pavilion” did indeed feel a bit like coming home again: “Elena, when are you back in Toronto? And Niagara Falls?? And Montréal/Québec? Skiing in the Rocky Mountains ..? And Newfoundland Labrador …?”

Currywurst. Party people. Strike action. Lost voices & newfound energy: Each and ever year, ITB Berlin really gets to us. Some of us walk up to 50 kilometres, or more, in three days. After eight hours spent at the fair, you are still off to at least one party per night. I doubt anyone gets to sleep much before midnight. And then, it’s up again by about seven or eight each morning …

No wonder you lose your voice (and other, minor things) in the course of events here.

But ITB Berlin is also all about love: Just as in real life, love is the answer. To everything. Love, and pride, in our community, who come together for an idea: The idea that travel can be a force for good. For seeding inspiration, for fostering peace and understanding, for encouraging a more balanced approach to life and our fragile, natural resources all over the world. Let’s live, share, and perpetuate this generous vibe of mutual respect, and togetherness. It’s how all of us will make progress. Thus, and through a little more partying, perhaps.

Right, Janett? Thank you so much, dear team at “Schauinsland Reisen”, who have hosted a huge, happy farewell party in Berlin. 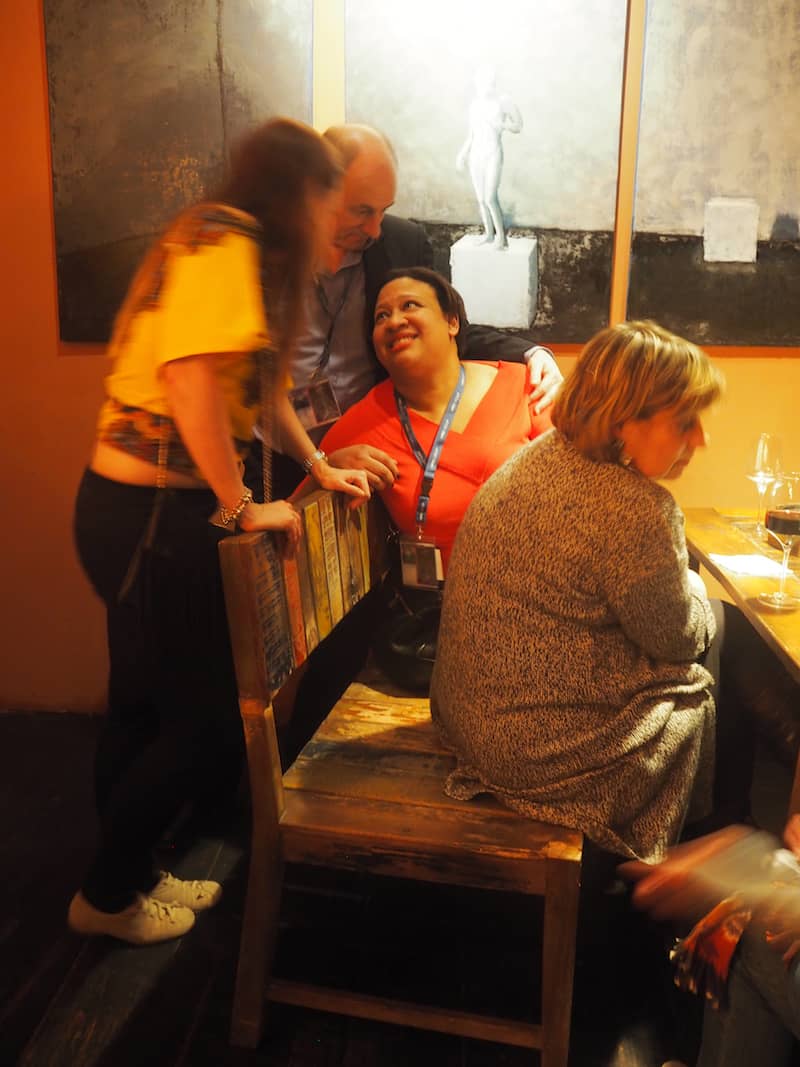 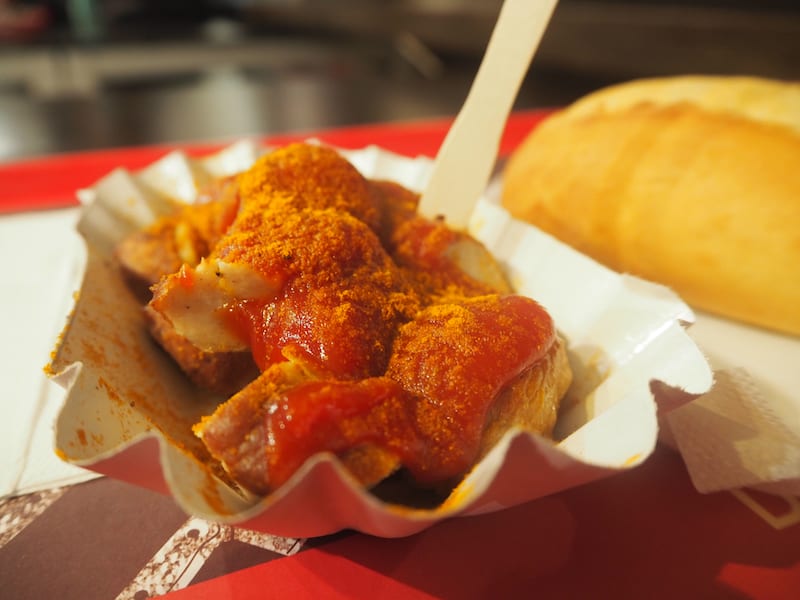 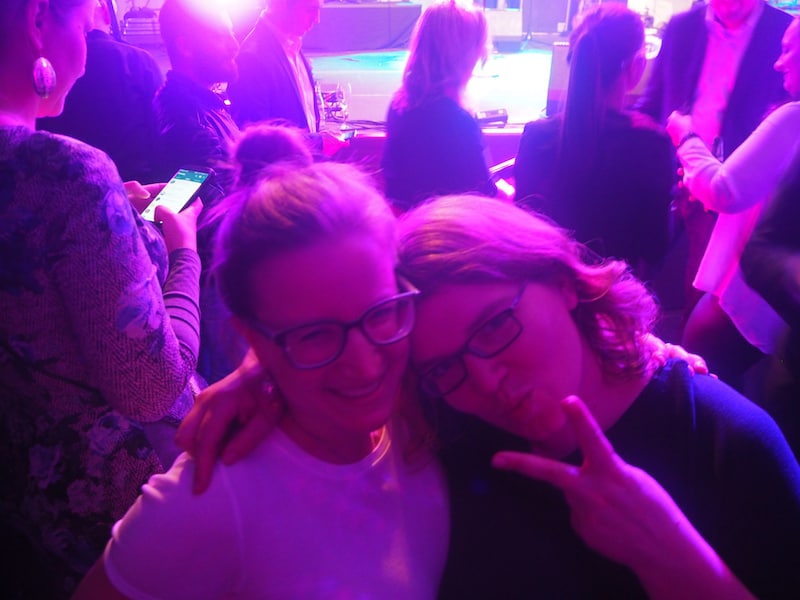 All pictures, all people, are found here:

#PINGFestival18 : An update on Influencer Relations from...

Preparing for the Way of St. James in...